This comes to us from the ABC, which is the Australian Broadcasting Commission, our National Broadcaster.

Makes for an interesting read, of a tracking station I was unaware of until now, and the part they played in the Moon mission.

Interesting, from my perspective, is that Cooby Creek is only 171 km (a little over 100 miles) from me - might have to invest in a drive out there.

Not at all, Paul ... Elaine and I laughed our socks off at Fishy's anecdote, perhaps we can feature it in a Thread at Off Topic eg "Classic Blunders", lots of scope?

Yeah, I cannot imagine making a blunder like that!!!!!!!!

A 10 minute video here - if it tells you "content not available", you should still be able to get to it, I hope.

Now that the (moon) dust has settled, this Thread will fade off into memory, likely.

Before it does, I’d like to revisit the Conspiracy Theory one last time, at least for me.

That does not mean to say that friendly discussion of same should be stifled, that “here’s the last word, and that’s an end to it, and I’m a Mod!”

Those who know me know that I am not like that, and that I encourage free thinking, and thinking outside the box.

We have this newly-introduced Off Topic Section, thanks to the efforts of our erstwhile Administrator @Rob, and so if pro- and anti- Theorists wish to continue, they could either set up their own Thread, or continue on with this one as reference.

That being said, there are two (2) main factors, adding to the above, which I believe to have made it extraordinarily unlikely, if not impossible, for a conspiracy to have been perpetrated.

And they are Australian in origin. They are

... is the Commonwealth Scientific Industrial and Research Organisation, of Australia.

If new wheat varieties are being developed, new work done on resistance by cattle to disease is being conducted - the CSIRO will be involved.

If the seeds of millions of plants are being stored in vaults in the permanent ice in the Arctic for future famine or disaster, CSIRO will head up provision of Australia’s share.

Space Race and space tracking dishes, CSIRO. You get the picture. It is Australia’s most prestigious organisation. And it has been around all my life. Think Smithsonian Institute and British Museum, take it down under - CSIRO.

NASA, since the 60s, have had a Liaison Officer for Asia, Australia and the Pacific. With the moon missions, that person dealt with - the CSIRO.

In the Wikipedia article that MrVic linked to, on the missing tapes, at the bottom, as with many Wikipedia articles, there are references and links. On the right-hand side of those is an article in PDF format by CSIRO’s John M. Sarkissian.

It is 22 pages, but well worth the read, on the 3-year journey Sarkissian and fellow staffers embarked on, to track down the tapes.

He entered the Upper House of Parliament, The Senate, in 1949, and served his community for 26 years until re resigned in 1975. He was the first Senator to become PM.

There is a wonderfully interesting article in Wikipedia, here

Gorton was a WW2 fighter pilot for us, flying the skies over New Guinea and Malaya. His plane crash landed on Bintan Island (on land), but his wingtip caught and the plane flipped and he was smashed against the winsdcreen. He was cared for in the hospital in Bintan until he was evacuated by ship, whereupon his rescue ship was torpedoed and sunk by the Japanese.

You just couldn't kill the guy! He was meant for something?

With his facial injuries, he went under the knife of early plastic surgeons, nowadays known as cosmetic surgeons, but they had a tough tableau to work on. From that time on, his was never a pretty face. 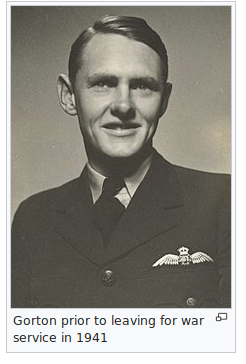 and in later years 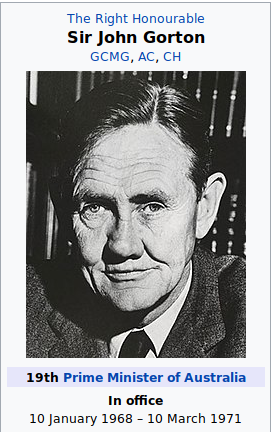 The second shot shows text including "The Right Honourable" which was exceptionally so.

In 1971, as both Prime Minister and Party Leader of The Liberals, Gorton face a vote of confidence in party rooms, on his leadership.

The vote was 50 - 50 and Gorton as Leader and PM had a casting vote. Not happy to head the party with that little support, Gorton exercised his casting vote and voted himself out of the Leadership and out of the Prime Ministership.

He is the only Leader to have done this in 118 years of Australia's being a Commonwealth.

In his remaining 4 years in politics, he acted with such honour at least twice more, but you can read about that if you choose.

So where is this leading?

Australia, with its position in the Southern Hemisphere, was ideally situated to cover parts of the Cosmos that were invisible to America (the same applies in reverse - you see some stars we cannot). The only other spots that might have served as well (the lower half of our country is south of South Africa) would be New Zealand, the southern tip of South America, and Antarctica.

Infrastructure was for the most part already in place, because of our own, much smaller, Space Effort, so we were a logical choice to aid the USA.

Because the astronauts were enthusiastic to get out on their EVA (extra-vehicular activity), they cut short their rest time, and left the landing module ahead of schedule. Consequently, Goldstone in California took the first minute or two of the transmission, and then Australia took over for the rest of the "feed".


FOR THERE TO BE AN ACTUAL FAKING OF THE EVENTS...

The CSIRO would have had to have been complicit in the fraud. I would submit that that could not happen.

For it to happen, the CSIRO would have had to be ordered to participate, from Executive Level.

So my submission is that there was no operational conspiracy.

I was at Tighes Hill Tech College attending the required classes for my Fitter and Machinist ( millwright as the Canucks know it as) apprenticeship when Armstrong kicked the Moon.
My oh my, how the river of time carries us relentlessly on through the years.
To accept good advice is but to increase one's own ability.—J. W. von Goethe. (1749 – 1832)