Cool And The Gang

Cool And The Gang said:
I have read Zorin is the closest looking and feeling to windows 7, which it seems is the closest to a windows 10 version you mentioned. As far as I've read it seems to be a great fit for Windows users to make an easier transition. Being overwhelmed out of the gate can turn new users away. There is plenty of time to get immersed later if you like the move.
Click to expand...

Here is a link

Then pick whatever the hell you like and play around to your hearts content
Condobloke ...Outback Australian :: fed up with Windows antics...??....LINUX IS THE ANSWER....I USE LINUX MINT 18.3 EXCLUSIVELY.

“A man travels the world in search of what he needs and returns home to find it."

It has been said that time heals all wounds. I don't agree. The wounds remain. Time - the mind, protecting its sanity - covers them with some scar tissue and the pain lessens, but it is never gone. Rose Kennedy

I concur with what Condobloke said.
I may be slightly bias as I also run Mint 19.2 just haven't bothered to upgrade to 19.3 as of yet.
I also have Manjaro and MX linux on USB sticks to play around on and get use to other desktop environments and get an experience with other distros.
To accept good advice is but to increase one's own ability.—J. W. von Goethe. (1749 – 1832)

@vishnudas
One more vote for Linux Mint!
By the way, WELCOME! to the best Linux forum on the net. These people are great helpers.
I have several different distros on my experimental laptop that I use to test different ones.
I concur exactly with what @Condobloke has written. Can't think of an easier transition from Windows to Linux - and I have tried many.
The way I see it is this: you have to walk before you can run; so start simple and then get more complicated.
Old Geezer
Tango Charlie
Henry Ford once said - concerning the Model T and Model A Fords - "You can have any color you want, as long as it is black!"
A correlation to this might be - "You can have any Microsoft Operating System you want, as long as it is Windows 10!"
That's one of the big differences between Linux and any other OS - Freedom to choose!!!

Me neither. That was amongst the first things I felt so happy from switching to Linux; no need for AV, not that it is completely and totally inmune but compare to windows ... and yet, I have never ever had a virus/malware scenario, NEVER!!

jglen490 said:
I have used Linux antivirus, but in general they are a waste of CPU cycles.
Click to expand...

Totally agree on this; a waste of resources.

jglen490 said:
clamAV can be the cause of slowness, to some degree.
Click to expand...

Maybe, I didn't bother to investigate the why, simply moved on.
without each other's help there ain't no hope for us!

I think it's probably best to use a virtual box and play with all the different type of distros that were mentioned and once you do enough install and configuration to it, it will feel like second nature to use Linux.
I just got rid of Zorin on my macbook air and installed Arch twice lol the first time it took me forever to install the wifi and the 2nd time much quicker.
A lot of the users just jump right in and just learn as we go.

Linux Mint is also good since I used it before. You can't go wrong with the ones mentioned. 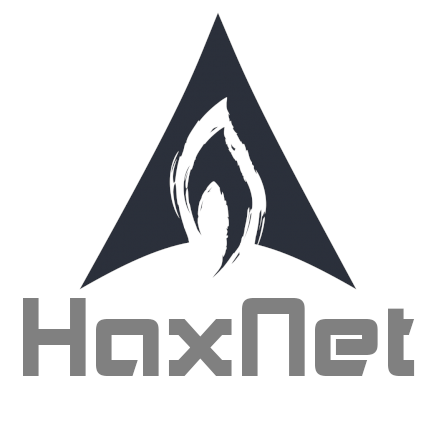 HaxNet said:
I think it's probably best to use a virtual box and play with all the different type of distros that were mentioned and once you do enough install and configuration to it, it will feel like second nature to use Linux.
Linux Mint is also good since I used it before. You can't go wrong with the ones mentioned.
Click to expand...

I always advice people to use VMs to try whatever it is they want to; a linux distro, some software, customizations, and so on ... I've done that for a long time and it's been the best learning resource I can think of. I noticed no one has mentioned Q4OS which I've been playing with like for a couple of months now and think's quite a very good one to try. Ships with the TDE desktop 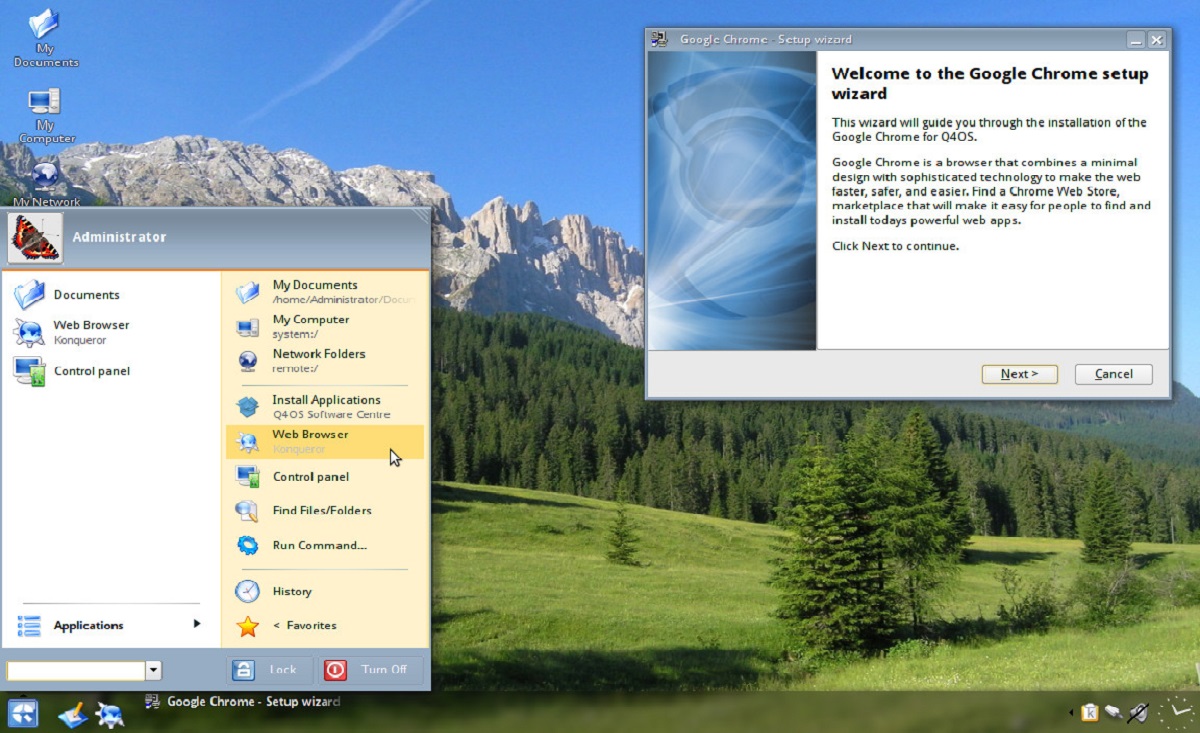 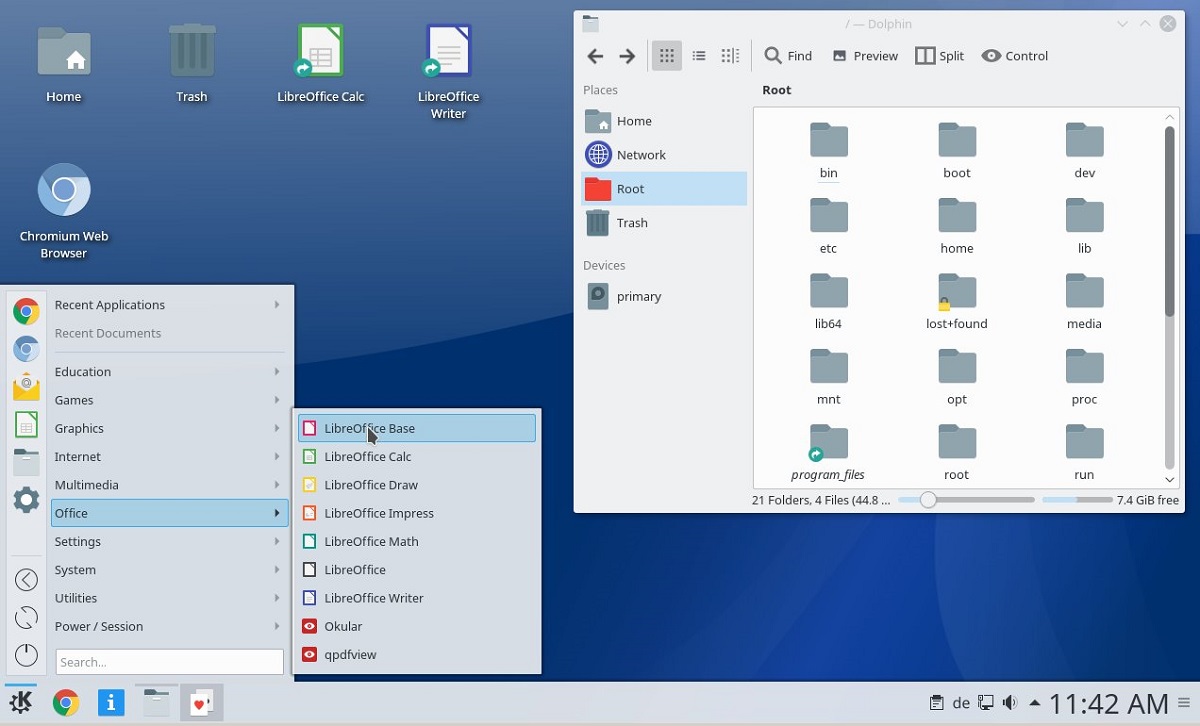 I'm using the one with Plasma and it works great; pretty stable, fast and friendly on resources, ram usage is below 400MB at idle.
without each other's help there ain't no hope for us!


Linux is NOT Windows
"Under certain circumstances, profanity provides a relief denied even to
prayer."
(Mark Twain)

"Inspiration can be found in a pile of junk. Sometimes, you can put it together with a good imagination and invent something."
(Thomas Edison)

If you are an absolute noob and care about a 64 bit operating system and more importantly 64 bit applications, then Kanotix is the way to go, but if you already have got your feet wet in the world of Linux for a year or more, then the bare bones version of Q4OS TDE desktop with classical Bourbon should fit your bill, which on idle consumes 268mb of physical ram. They may not look bling, but will get your job done in a flash. During this SARS Cov-2 mandated lock-down, I have tried all flavours from number 1 to 35 on the distrowatch website and rest assured that these two distributions should fit your bill.
I tried it not in a Virtual-Box but actually installed it onto to my 12 year old desktop with an AMD 570 processor and 8GB ram on an Asus M4N68T-M motherboard with a nvidia9600GT video card and a 10 year old 40 GB Hitachi hardrive. Not one hiccup was observed during installation and 10 minutes of browsing the web on google chrome. If it can run on my relic it should run on any combination of laptop or desktop.

Please note very, very few 64 bit operating systems use 64 bit applications. Most of the distro's that I tried did work well in the virtual environment, but when installed onto the physical computer, there was some issue or the other, and I did not waste more than 10 minutes trying to solve the issue.

If you are paranoid about virus/malware, install firejail and you can then go to the most sleazy, come hither website and still come out a virgin.
Last edited: Apr 14, 2020

G'day and welcome Pullockaran.
Tell us a little more about this little program, it tickled me curiosity.
To accept good advice is but to increase one's own ability.—J. W. von Goethe. (1749 – 1832)

I just took a quick look and it looks like it's a sandbox, not an AV program.

Nik-Ken-Bah said:
G'day and welcome Pullockaran.
Tell us a little more about this little program, it tickled me curiosity.
Click to expand...

SUID program that reduces the risk of security breaches by restricting the running environment of untrusted applications using Linux namespaces and seccomp-bpf. It allows a process and all its descendants to have their own private view of the globally shared kernel resources, such as the network stack, process table, mount table.
Click to expand...

https://firejail.wordpress.com/ If you ver used sanboxie https://www.sandboxie.com/ in Windows, which I did and it was very useful, is a similar program.
without each other's help there ain't no hope for us!
P

Nik-Ken-Bah said:
G'day and welcome Pullockaran.
Tell us a little more about this little program, it tickled me curiosity.
Click to expand...

Good Day to you all, Firejail is a simple sandbox programme available as a .deb file or on dpkg/apt-get, similar to the now open source Sandboxie for Windows XP and above. Sandboxie, Webroot anti-virus along with Evorim Free firewall is like a safety net for surfing the net while using Windows for games. I mentioned Evorim because Microsoft abhors it to the core. Install it on a Windows 64 bit machine and you will know why; when you go to the application and services menu of the Evorim Software. The number of windows applications calling home is mind boggling even with all parameters of O&OShutup10 toggled on.
I mentioned Webroot because the virus-signatures are on the cloud, which means it is an extremely frugal install, but requires an always on net connection though. For gaming on Windows the combination is unbeatable after experimenting since 1996 on Windows with varied software. Waiting for Steam/Proton for Linux to fine tune their software and bid goodbye to Windows completely.

A divorce is on the cards anyway after the father-in-law(Microsoft) refused to keep Windows 7 updated. I have no interest in the bloated sister-in-law(Windows 10) who the father-in-law is trying to pawn on to me, since my rickety houseboat(computer) will capsize with her weight and constant nagging.

Unfortunately for Firejail, Google Chrome does not work in Firejail, but all other browsers do, because there is supposedly a conflict with Google Chrome's own sandbox. I tried all permutations and combinations with my limited knowledge in Linux that I have garnered, since getting my feet wet with Linux BeatrIX by Steven Watsky, but to no avail. If anyone of you can get Firejail to foxtrot along with Google Chrome, just like Firefox does, I would be very grateful.

I want to make Firejail, Gufw and ClamwinTK along with bare-bones bourbon classic desktop Q4OS, my mainstay in all my computers and laptops after divorcing the Windows family for good. Presently it is a chore keeping both of them families happy.
Last edited: Apr 15, 2020