What is the best way to change the leaderboard and get the distro that I want to be in control?

You'll need to install from Ubuntu-based distro, I think, but other distros may be possible. And you'll want to be careful.... messing with GRUB can mean breaking your system again!

atanere said:
And you'll want to be careful.... messing with GRUB can mean breaking your system again!
Click to expand...

I am getting pretty good at putting it back together though!

Jeffrey Lapinski said:
I am getting pretty good at putting it back together though!
Click to expand...

I believe I said once before something like, "You'll soon be teaching this class!"

Few people follow in the Wizard's footsteps... (maybe due to the smell )... but you've done a fine job. I fumbled along a bit some time back and had 4 OS'es multi-booting, back before I met Chris. But these days I find VirtualBox to be good enough for me, or live booting on a DVD or USB.

atanere said:
Few people follow in the Wizard's footsteps... (maybe due to the smell )... but you've done a fine job.
Click to expand...

I am running 7 on my 2nd laptop currently (all Ubuntu or Debian based) and it is working quite well! I want to get the hang of the process using Debian based down before I start to introduce different (Arch, etc) based distros into the mix.

Smell, schmell, I heard that Stan.

I would advise against using Grub Customizer, unless Daniel Richter has made significant improvements with his last couple of releases (which he may have).

I last used it about 2 years ago, and it was a nightmare with multiple Distros, and a nightmare I spent weeks cleaning up after , after I had removed it.

I have to go but I'll come back with more detail when I can.

THOUGHTS FOR SEPTEMBER 2022 1. Ask me in October. 2. ON AV - nothing is bulletproof, but i wear kevlar - i use linux. 3. Still Beer o'clock where I live . 4. Come and have a sing-along at Rock Roxx . 5. Why so many Distros, Wiz? 6. Brighten Up Your Grub 7. Computers are like air conditioners. They work fine until you start opening Windows. ~Author Unknown

Jeffrey Lapinski said:
Is he Yoda??
Click to expand...

No, just an old, old wizard.

And still quite dangerous!
The end of the Internet

I'm glad that Wizard intervened about GRUB Customizer.... I have used it before with no problems, so I didn't think too much about it not being able to control the multi-multi-boot scenarios. The page I linked to also has extensive GRUB and GRUB 2 tutorials that might be worth the read, but I did not carefully evaluate them either, and Wizard might also spot errors or deficiencies there. If they are any good though, they might make a nice reference for you. Here they are: GRUB and GRUB 2.

Thank you! I’ve been meaning to read up on GRUB/GRUB2!

Thanks for sharing those links, Stan, I will take a look at them

Here's a (believe it or not) brief summary of some of my thoughts on Grub Customizer.


Grub Customizer was released by Daniel Richter in 2007.

For the most part, it is installed via Ubuntu’s development of PPAs (Personal Package Archives), but some Distros actually ship it as installed, as Peach does nowadays.

Grub Customizer has a number of functions, but two of the main features that attract people are

The outcomes of these operations are acceptable.

BUT (Wizard’s but is not far behind him), there are two major problems I found with the versions that I used, one is tiresome at least, and the other is a PITA at its nicest. 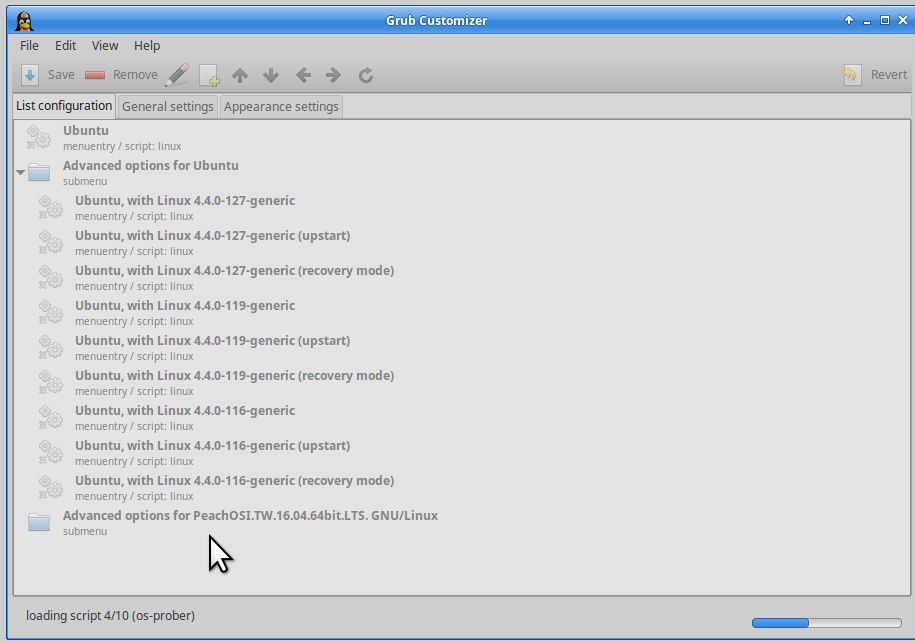 So with an extreme example, which is mine currently, where I have just installed a Distro on /dev/sda50 on the Toshiba, I might have 500 lines to move, one at a time, in order to move my bottom Distro to the top. On the Dell Inspiron, currently with 14 Distros, 140 lines.


2. Following my decision, at that time, to undo the effects of Grub Customizer and remove it, I found that its Revert feature did not undo all the changes I had made using GC. Furthermore, for some two (2) months following, I found my Grub Order mysteriously change from time to time, including the placing of false entries, even of Distros I had removed from my System. There were occasions that were outside of the usual events having taken place that can affect your Grub Menu order, including but not limited to
The changes I attribute to the after-effects of Grub Customizer having been used.

I have more material I could provide here, but I may save that for a separate Thread. Suffice it to say I won’t be using Grub Customizer again unless I have it on good authority that these problems have been remedied.

I can change the order of my Grub Menu simply by planning some Timeshift Restorations.

THOUGHTS FOR SEPTEMBER 2022 1. Ask me in October. 2. ON AV - nothing is bulletproof, but i wear kevlar - i use linux. 3. Still Beer o'clock where I live . 4. Come and have a sing-along at Rock Roxx . 5. Why so many Distros, Wiz? 6. Brighten Up Your Grub 7. Computers are like air conditioners. They work fine until you start opening Windows. ~Author Unknown
You must log in or register to reply here.
Share:
Facebook Twitter Reddit Pinterest Tumblr WhatsApp Email Share Link
$100 Digital Ocean Credit
Get a free VM to test out Linux!