We just smashed a spacecraft into an asteroid that was 24 times the distance to the moon - and the craft was moving at 14,000 MPH.

Sure, we haven't colonized the moon like we thought we were going to in the 60s, but we've come a long, long ways.

Go Science!!!
We actually have some rules.
Hey, how long have you been using Linux? Please see the poll (and vote) at this link.
Learn how to ask a good support question (UPDATED!)
I have decided to offer inexpensive Linux-based web hosting.

KGIII said:
We just smashed a spacecraft into an asteroid
Click to expand...

You'd think that over that distance they would have time to avoid it, or change lanes?

That beats the crash that buggered your knee, by a long ways.

Morning David, off for my 3rd coffee.

wizardfromoz said:
That beats the crash that buggered your knee, by a long ways.
Click to expand...

And, well, they actually want to crash into the asteroid. The goal is to knock it into a new trajectory. It's an idea for redirecting future objects that would otherwise smash into our planet. They set out to smash the asteroid with said spacecraft. It was quite a feat!

They'll be studying this for years and paying close attention to what happens next. It should be interesting.

Also, the idea for this specific program (it's not even remotely a new idea) came from the European Space Agency. We just agreed to help and to support the mission, along with JPL's help.

That we can be. Oh man, don't our drivers tend to suck. We'll give anyone a license and then it's quite a pain to take it from them, unless they were quite outlandish. I've driven all over the globe and we're not the worst but we're not good at it. No... No, we are not...
We actually have some rules.
Hey, how long have you been using Linux? Please see the poll (and vote) at this link.
Learn how to ask a good support question (UPDATED!)
I have decided to offer inexpensive Linux-based web hosting.

I think, truly, it is fascinating, and it's a whole lot more proactive than bending over and kissing your arse goodbye and waitng.

Yup I watched it it was cool.

Data from the test will not only demonstrate whether the idea works, but also help NASA understand how it could be applied in the future. 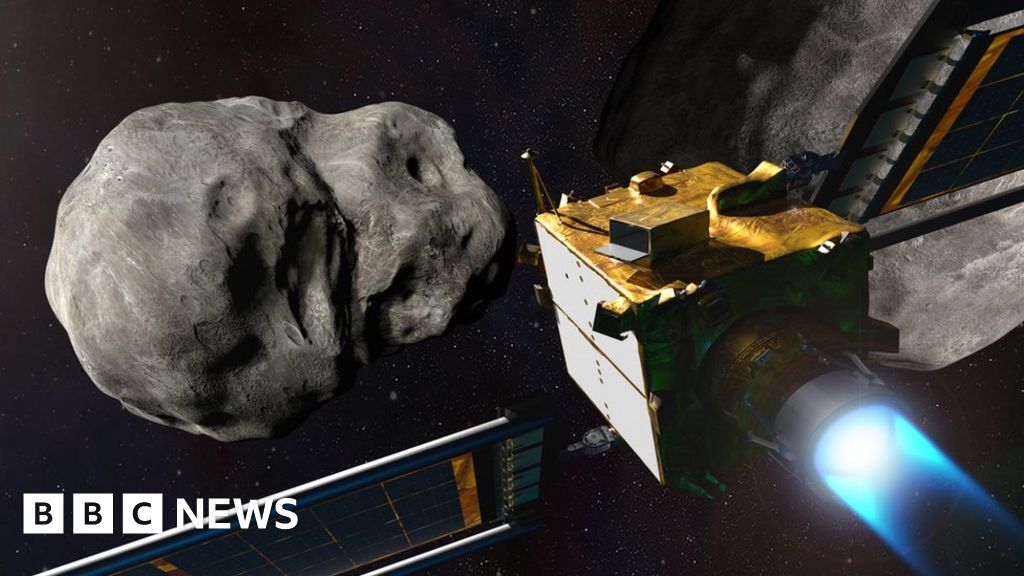 Nasa spacecraft lining up to smash into an asteroid

The Dart mission will test a technique for defending the Earth against hazardous space rocks.
www.bbc.com

But the question is did it move the Asteroid?
And yes U.S. Drivers can be dangerous. More so now that everyone has a cell phone. Here in Maine the says you can't talk on your cell unless you have hands off connection. But see people doing it all the time. Of course up there where David G. is located he deals with much less traffic , well for part of the year anyway

I don't believe that NASA knows what the extent of destruction.
It's my understanding NASA will be analyzing the data over the next few months to determine the amount of destruction which occurred.

There are unsafe drivers in every country I've been to.
Driving anywhere is hazardous from my experience.
The US ain't got the patent on unsafe drivers.
OP
K

kc1di said:
well for part of the year anyway
Click to expand...

I don't really have much traffic, compared to previous areas I lived in. So, there's that.

I'll explain for those who are unfamiliar with Maine/my area.

There's ski slopes in three directions - all of which are the only real routes into civilization. That's my winter. I'm surrounded by people who can't figure out how to drive in the snow. I also have a giant plow on my truck and a broadcast sander in the bed of my truck. One of these days, I'll end up driving into an idiot that pulled out in front of me. The momentum is going to push them a long ways. It might dent the plow a little.

There's a lull right now, but the hunters will be here soon. So won't the foliage viewers. Also, it's that time of the year that moose get extra stupid.

Come spring, I still have people skiing. Then there's a lull before the black flies and mosquitoes come out. Those don't cause traffic, but I thought I'd mention it. It's right about that time that people show up to fish.

Finally, there's summer. The population of the area grows tenfold, quite literally. But, I can kinda avoid a lot of that by going down through the Sugarloaf area. Not too many of the Rangeley tourists venture up my way, but they make going into the village a bit of an ordeal, 'cause the town's infrastructure is not designed to handle that much additional traffic.

But, at the end of the day, I can't complain too much. I knew this stuff when I bought the land and the area would be in dire straits without the money made from tourism.

If you want to know why people flock to the area, do a Google Image Search. Heck, I'll do it for you...


Bartman said:
I don't believe that NASA knows what the extent of destruction.
Click to expand...

That is correct. They'll be watching with a number of terrestrial telescopes. There's bound to be some news along the way, but they'll be studying this for years to come.
We actually have some rules.
Hey, how long have you been using Linux? Please see the poll (and vote) at this link.
Learn how to ask a good support question (UPDATED!)
I have decided to offer inexpensive Linux-based web hosting.

KGIII said:
Then there's a lull before the black flies and mosquitoes
Click to expand...

And he's not kidding about these
Spent many a summer and fall in Rangley, Grew up in Farmington, (which is about 40 miles south), But my Grandfather worked as a cook up there so spent time with them. I now reside in the the south near the big city of Portland, ME a completely different world than up where David G is located.

Just to keep it on topic will be looking forward to see what the results are from the big crash yesterday. All crashes cost money but Man this one $324.5 million I'm sure glad I didn't have to pay their insurance bill.
Last edited: Sep 27, 2022
Dave Located in Maine USA
Kubuntu -22.04- KDE
Mint 21, Cinnamon
MX-21 - XFCE
Fedora37-KDE
PCLinuOS - XFCE
OP
K

kc1di said:
And he's not kidding about these
Click to expand...

At one of the stores, there's a picture on the wall of a dude fishing. They're wearing a light colored t-shirt that looks like it's black - as in almost no t-shirt can be seen beneath the shirt. It's in black and white, so I can't be certain of the exact color, but it's a light one - and it's covered in black flies.

So, it could be worse!

The mosquitoes are horrible, about a meter wide and sucking down two liters of blood each. (That is not even remotely true, but they certainly suck - in multiple ways.)

On a positive note, spring was short and there wasn't a lot of standing water. So, we had a pretty light year as far as mosquitoes go. Summer came fast and hard, and was very hot. If you didn't venture into the shady woods, it was pretty great.


kc1di said:
All crashes cost money but Man this one $324.5 million I'm sure glad I didn't have to pay their insurance bill.
Click to expand...

Trivia: Payloads are insured against loss (and more) due to rocket malfunction or the likes.

PDF warning: https://www.faa.gov/about/office_org/headquarters_offices/ast/media/q42002.pdf
We actually have some rules.
Hey, how long have you been using Linux? Please see the poll (and vote) at this link.
Learn how to ask a good support question (UPDATED!)
I have decided to offer inexpensive Linux-based web hosting.

As long as they can do it when it counts.

Linux Forever...Nothing Else Matters.
Linux Mint Cinnamon 19.1 and 20.1 For Freedom

https://twitter.com/i/web/status/1575483429977673728
We actually have some rules.
Hey, how long have you been using Linux? Please see the poll (and vote) at this link.
Learn how to ask a good support question (UPDATED!)
I have decided to offer inexpensive Linux-based web hosting.
You must log in or register to reply here.
Share:
Facebook Twitter Reddit Pinterest Tumblr WhatsApp Email Share Link
$100 Digital Ocean Credit
Get a free VM to test out Linux!