Yes! at the top, 'InsydeH20 Setup Utility' but nothing beyond that.


This ADATA Flash Drive is the one that I made with mint 19, it does indeed load Mint 19 on other computers.
Steve

Staff member
Gold Supporter
Sweet - that may come in handy.

Do you remember this from #1

From bios it will get to the first menu to chose mint 19, or mint 19 advanced, or OEM (for manufacturers), etc.
Click to expand...

I'll show you a few pics and detail a little, and see if you can get to there again and we can try them. 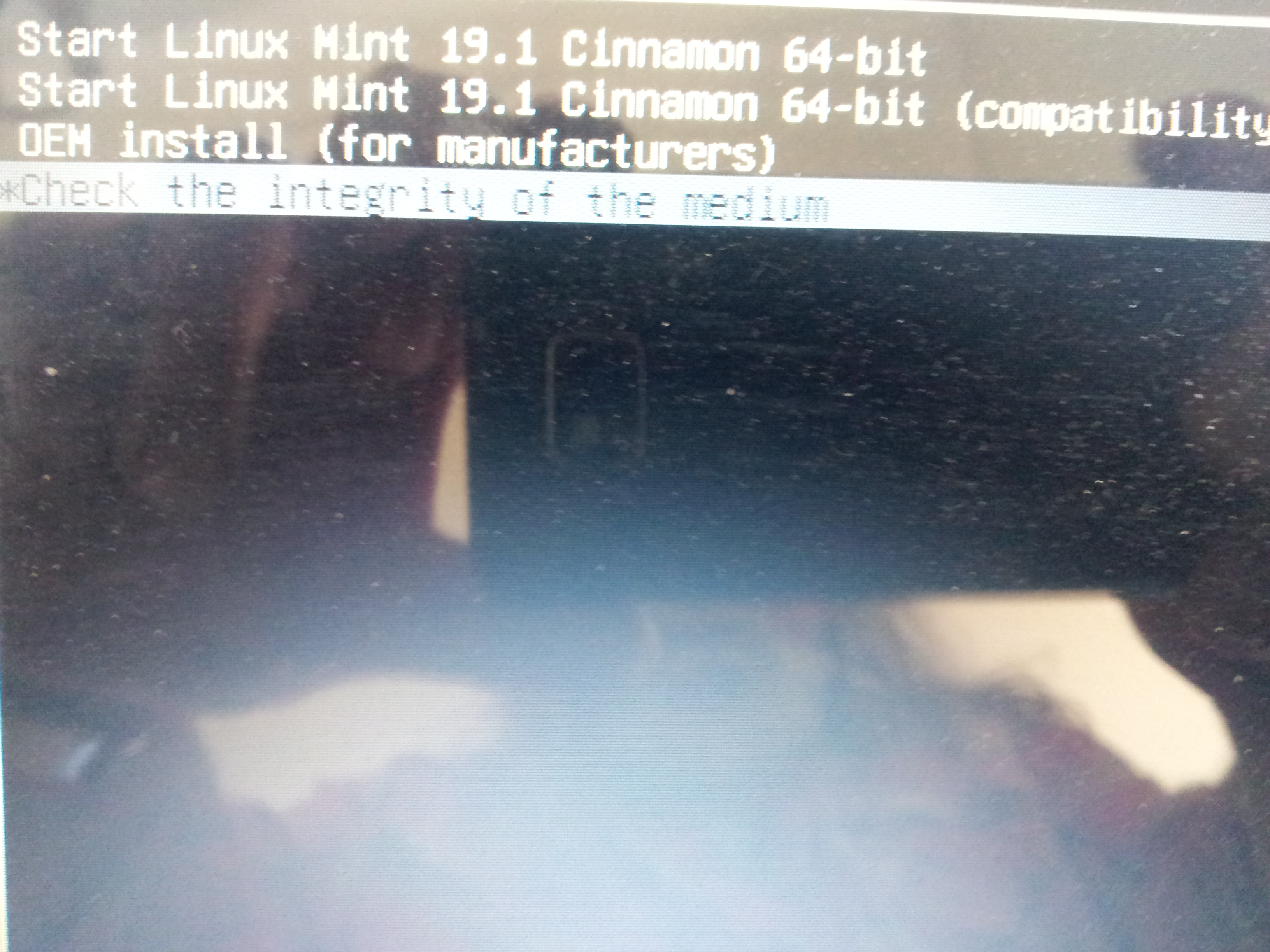 This may closely resemble what you saw, don't mind small differences.

It is the top line we want to go into when the time comes, and note that this is with our BIOS set to UEFI, not Legacy.

The compatibility option (may read Advanced) can be worth a look too as can integrity, but your stick and has worked on a different computer, so no need for now. 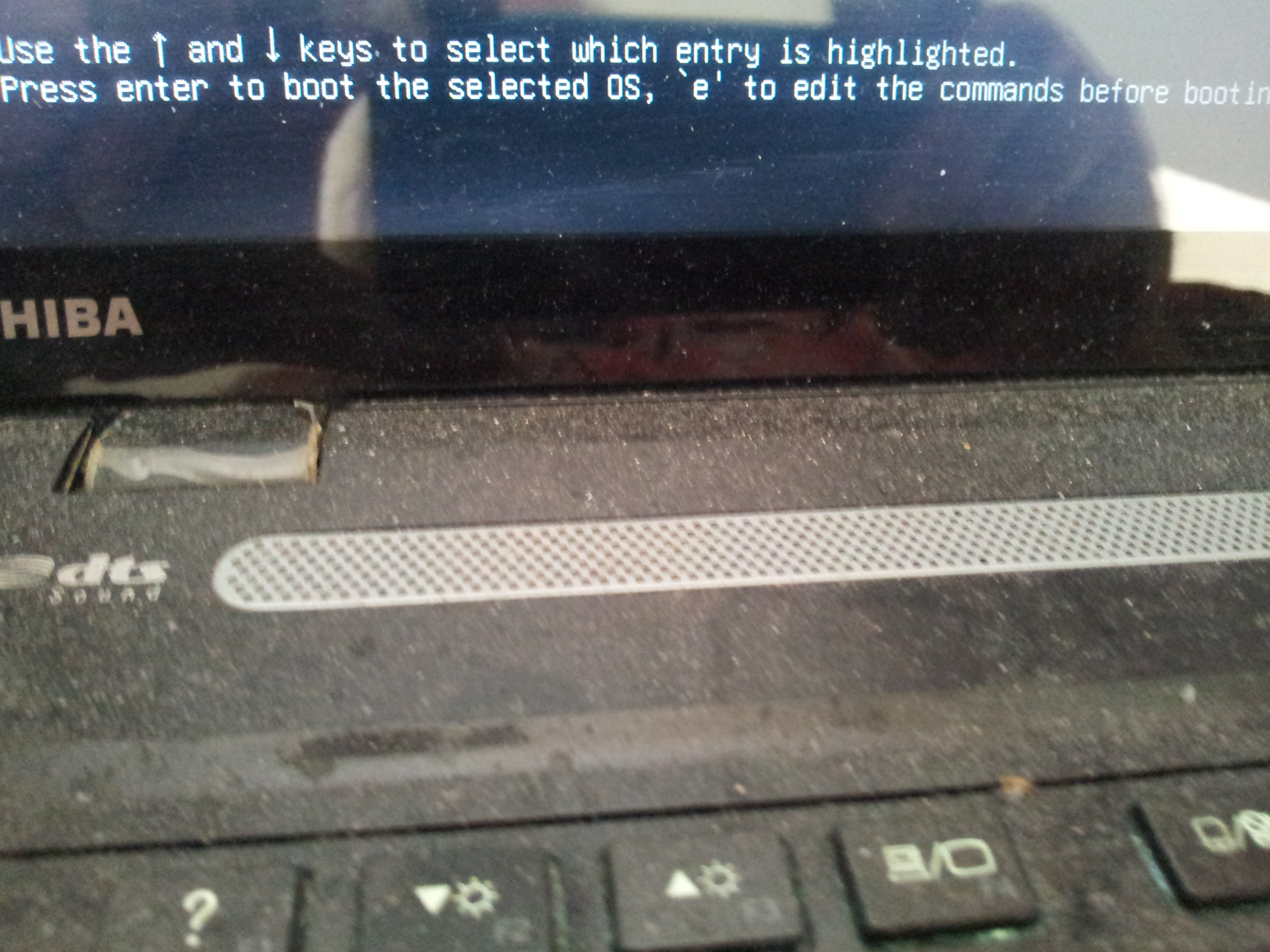 SHOT 2 - SAME SCREEN BUT AT THE BOTTOM OF SCREEN

This is from the bottom of that screen, but what lies "behind" choosing one of these options differs according to which line you choose to press a key for. If you wish, you can toggle between the different line, press a command key and then press Esc to return to the previous menu.

The bottom line I did not quite catch fully (crap photographer), and after " 'e' to edit the commands before booting", it follows with "presss 'c' to get a command line".

However it is 'e' to edit we are going to choose.

So I press enter (with highlight bar on top option), and get to 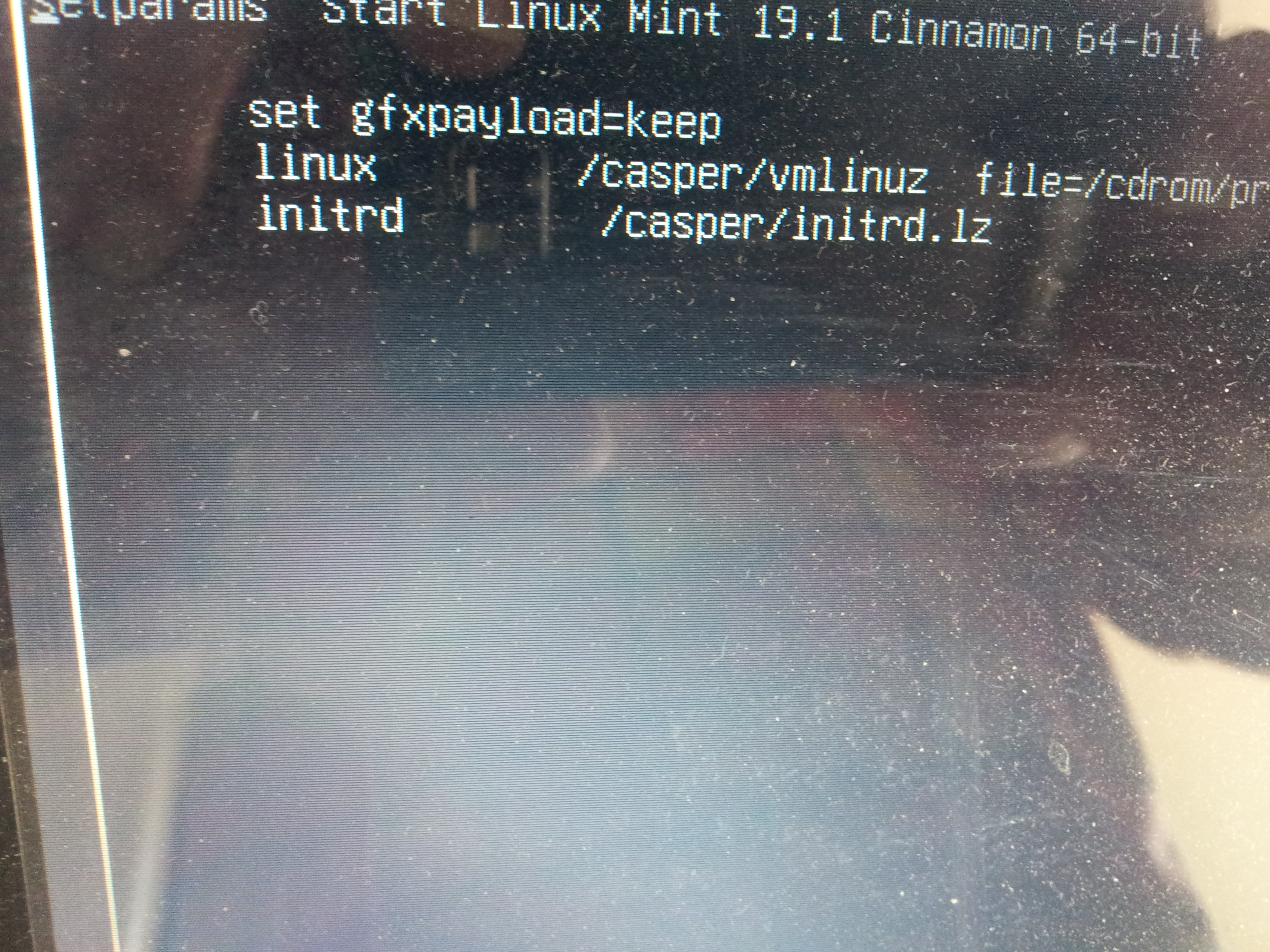 Yours may be close to or identical with mine, or differ, sometimes influenced by burning method of the .iso, and other reasons.

It will have the line that starts with "linux", and that is our focus.

Long line on mine, but I go to the end of that line and it looks like this 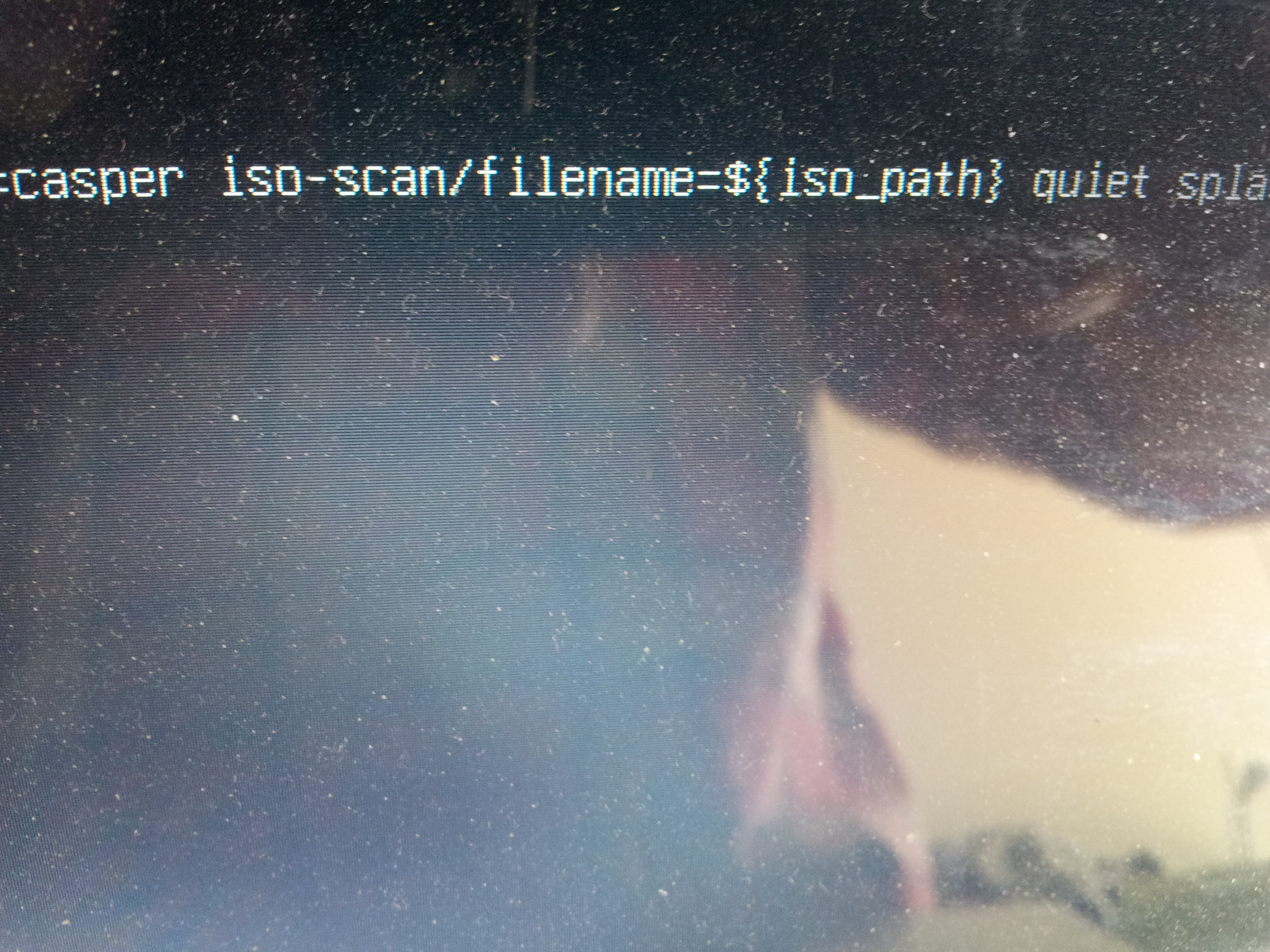 SHOT 4 - HEADED FOR A QUIET SPLASH

Still could not quite capture the remainder of this line but you will get the idea.

The end bit will say "quiet splash" and quite likely "quiet splash --" , that's a double dash or double hyphen at the end. Let us know if that is so.

Navigation within this screen is by direction arrows.

Arrow down to the line starting with linux (it doesn't matter if the words are inset a little). Then press End and the insertion point should be taken to the end of the line.

Left arrow back with the insertion point until it is under the q for quiet.

Delete quiet splash, and replace it with "nomodeset" without the quotes. If that double dash is there, leave one space between the end of nomodeset and the double dash.

Then press End to move the insertion point to the end, and then your next step will be to press F10 or as directed, to boot into the usb stick's Live environment to install.

WHAT DOES THIS DO?

The black screen with a blinking cursor (also referred to as blinking underscore) is possibly the closest thing Linux has to a Windows Blue Screen Of Death, in other words, a PITA . Doesn't happen as often.

Typically it happens after what appears to be a successful install of Linux, following a reboot. In your case, it has happened the a Live stick.

There can be a number of causes for each scenario, and thus a number of remedies, so we may have to be patient.

As often as not, the cause may be a difficulty in identifying the video card drivers &c, in this case, of the Lenovo. By using nomodeset, we bypass that. Deleting the quiet splash means that when you launch the Live session, first of all output will spool down the screen, hopefully with a lot of white or green "OK" 's at left, and there will be no Linux Logo (splash) on the way in.

If you follow the above, then initiate the process and hopefully you will at the end of the process have the tinkle of Cinnamon bells, and be on the desktop ready to install.

With Cinnamon, the use of nomodeset may generate a popup window with this

No need to worry about this for now, just X out of it. It is actually an option you can invoke on your Desktop setup at login (click the icon near where you type your password for the drop down choices) if you want to experiment.

So see how you go with the above, and report back with any progress or questions.

UEFI and legacy support with UEFI first both booted straight into Windows. Legacy only boots first into a countdown screen, then a grey screen. I tried again through the boot menu and now it only boots to Windows.
Steve

wizardfromoz said:
On the laptop, have you tried disabling Secure Boot and any Fast Start functions?
Click to expand...

Did you try either or both of those options?

yes, definitely, fast start is disabled, and I looked for but didn't see secure boot, or it is disabled.
L

Hello Wizard,
I went through it again and I don't see secure boot. The nearest I see is 'AMD Platform Security Processor' [ Enabled].
Steve

Staff member
Gold Supporter
Have a look at this, and in particular the thumbnail picture, and see how you go.

Hello, i just got the same laptop. The windows installed on it its not of my like so i just did a restore usb and then ditch it. As i have read in other forums the problem its that

1-the bios has to be legacy to start
2-when starting (depending on how you created the usb) in UNetbootin you have to chose start in compatibility mode, then install
3-once you install it, then a few things will not work. The wifi, the video and the trackpad
4- download from here the driver for your wifi that is rtl8821ce put it in a usb Realtek drivers
5-you need a mouse cause the trackpad does not work, when you reboot you have to chose advanced options and then chose recovery mode, you will enter a screen, you don't need to chose nothing just click resume it will start like safe mode in windows
6-copy to home folder the wifi driver, unpack it and on terminal type cd rtl8821ce enter and then type sudo ./dkms-install.sh Then reboot.

7-again you load in recovery open terminal and type this

8-again recovery mode, now that you have internet its either to update everything or update the kernel, as i have read, after certain kernel the video will work and you don't need to enter on recoverymode anymore but i am testing each because it hangs.

If anyone has an advice on which version of kernel after 5.0 its stable i will be very grateful
Last edited: Jul 30, 2019

I like what you have shared with us, a lot of steps, but if that works for you, then it can be useful to others.

Is it Linux Mint you are using, or other?

The OP (original poster) has not responded for 4 weeks, so I am hoping he has resolved this issue, but if not, he may gain from what you have offered as well.


amrivas said:
If anyone has an advice on which version of kernel after 5.0 its stable i will be very grateful
Click to expand...

I would suggest your authoring a new Thread, perhaps in General Linux, featuring the kernel and your Linux Distro in the subject title to attract input.

And of course, if you feel so inclined, swing over to Member Introductions

... tell us a little of the amrivas story (sounds like you have some history with Linux), meet The Gang, etc.

This thread reinforces my belief that some Lenovos can be problematic, as has been debated elsewhere with @arochester and Tom @poorguy .

Also Stan @atanere has a Lenovo, and he used to have a handy tip on a button at the side, perhaps he can share that with us again?

I like what you have shared with us, a lot of steps, but if that works for you, then it can be useful to others.

Is it Linux Mint you are using, or other?

The OP (original poster) has not responded for 4 weeks, so I am hoping he has resolved this issue, but if not, he may gain from what you have offered as well.

I would suggest your authoring a new Thread, perhaps in General Linux, featuring the kernel and your Linux Distro in the subject title to attract input.

And of course, if you feel so inclined, swing over to Member Introductions

... tell us a little of the amrivas story (sounds like you have some history with Linux), meet The Gang, etc.

This thread reinforces my belief that some Lenovos can be problematic, as has been debated elsewhere with @arochester and Tom @poorguy .

Also Stan @atanere has a Lenovo, and he used to have a handy tip on a button at the side, perhaps he can share that with us again?

Gracias. I will do so. So this thread can be close or at least I will not make it grow. I will finish my profile and go to introductions and open a new thread.

wizardfromoz said:
Your call, Steve (& I see Brian @Condobloke , another Aussie, liked that, too)

Unlikely - Balena bought out Etcher 2nd half last year, so BalenaEtcher is Etcher, used for burning .iso's, it is cross-platform, works from Windozey, Linux and Mac.

If you need help with another burning solution, just ask and let us know whether from Windows or Linux.

On verifying, we call them hash checks, SHAsum, hash algorithms, it can confuse. Then there is GPG for signatures, but that can be looked at another day . It's all about making sure that what you want is what you get.

The Linux Mint details for SHAsum 256 are at their website.

Linux Mint 19 is 'Tara', 19.1 is 'Tessa'. If you check at your desktop, you can tell which one you are currently using by going to Menu and start to type in Welcome, its screen will show (also tells you the DE).


On hash checking methods, there are different ways with Windows and with Linux.

For Windows, I would recommend

Under Linux, Terminal or GUI available

With Terminal, say your iso has the name

For a GUI approach for point-and-clickers

try my Thread here, with GTKHash

That one has me a little curious. Jerry Bezencon produces Linux Lite, and with one exception, all his releases have been for BIOS/MBR, rather than for UEFI.

Anyway, see how you go and let us know.

I have the same issue. I haven't scrolled through the whole post yet but here is the screen I was getting. Only difference between his laptop and mine was that I had the Ryzen 7 2700 with 16gb ram.
Appreciate any help

Just to fast-track - have a look at

and you will see that the outputs are the same and the Ryzen the same.

If that doesn't help you, report back here first, and then I will carve off the Posts relevant to your problem and give you your own Thread.