Kali Install a success, entry on the other hand is difficult

Fresh, dual boot install of both Windows 7 and Kali Linux, with hard drive completely wiped clean and reformatted prior to install of either OS. Windows installed first.

Install was apparently successful, as the GRUB properly loads and processes start running after I select Kali..and I eventually get to the login screen. Live CD also suffers the following issue:

This continues on until I eventually get to the login screen..I had the patience once to get there. I was able to take a picture of the screen as soon as the screen came back on after the first wake up. Note the line ending in 1045. "Waking up from system sleep state S3", and the few just beforehand.

I can't very well try to do anything in Kali with a narcoleptic system!

I would like to also add that I have a desktop system with an identical dual boot system, prepared the same way with the same disc, has no issues whatsoever. So, if any repairs can/need to be made within another Kali console, I have the ability to physically connect the laptop hard drive to my desktop to make said repairs. Hi @Josh380 and welcome to linux.org.

Take a look at the page linked there

If this is your first entry into Linux, then using Kali as an entry point is rather optomistic, unless you have good reasons, which may be the case.

Cheers and good luck if you wish to pursue it.

Are you trying to say that because my system falls short of RAM requirements, this is the reason why my system keeps going to sleep? I've been building computers since 286's were top of the line and have never seen this happen due to low memory. I was under the impression that the swap area was supposed to "make up" for low memory.

But hey, new things happen all the time.......I've got a 2GB stick on the way. Unless someone else can offer a different solution we'll just have to wait and see what happens when I install the new RAM.
Last edited: Sep 21, 2018
OP
J

Care to take another stab at it?

Hi Josh, I think the first thing I would suggest is an attitudinal adjustment?

Despite the name of the site, its authors were simply lucky in getting "linux.org" and we are not an organ of Linux, nor officially associated with same.

Staff and helpers here are volunteers whom provide of their time gratis, all with varying levels of experience, some considerable, and from all around the world.

... simply to help others to enjoy their Linux, to learn themselves, and hope others will learn and contribute.

That being said, the low RAM was an obvious option to explore, if the system is behaving sluggishly. Now you have a system with more grunt, why don't we see what else we can find?

You said in your OP (Original Post), in part:


Josh380 said:
I would like to also add that I have a desktop system with an identical dual boot system, prepared the same way with the same disc, has no issues whatsoever.
Click to expand...

Is the dualboot with Windows, and if so, which?

Are you able to maintain a session at all with the lesser-powered unit, in order to get some log information? Or, as you say


Josh380 said:
...if any repairs can/need to be made within another Kali console, I have the ability to physically connect the laptop hard drive to my desktop to make said repairs.
Click to expand...

... this may allow you access to information that can help.

The presence of these two lines:

cache: parent cpu1 should not be sleeping

ACPI : button: the lid device is not compliant to sw_lid

... might suggest that there is a broken lid-close-suspend feature involved here?

Have you had the laptop set to suspend when the lid is closed under eg Windows?

First of all, no attitude here, that's just the way I talk. My apologies if I offended you.

Second, the original complaint in fact was not about a sluggish system (albeit the system was slow, and I knew why), but about a narcoleptic system (one that constantly falls asleep).

But the part where you mention the following intrigues me:

"The presence of these two lines:

cache: parent cpu1 should not be sleeping
and
ACPI : button: the lid device is not compliant to sw_lid
... might suggest that there is a broken lid-close-suspend feature involved here?

Have you had the laptop set to suspend when the lid is closed under eg Windows?"

The laptop is, by default, set to suspend under Windows when the lid is closed. Incidentally, I don't have this issue with Windows, if you were thinking there might be a hardware issue. Do you think if I disable that feature in Windows, then reinstall Kali, that might fix this issue? It seems like Linux reads info about devices and drivers from Windows during the install process, then uses that info to implement their use in the Linux environment. I'm just guessing and could be completely wrong here..

To answer your other questions, yes, the desktop system has a dual boot Windows 7/Kali Linux setup. The only differences are the desktop is much more powerful, and running 64 bit OS's. (and now I'm suddenly having problems with this system)

And no, I cannot maintain anything that could be considered a session at all. As I mentioned in the OP, just getting to the login screen is a bear. Several fall asleep/wake up cycles before I can even get to the login screen. I had the patience to get through it once..got all the way to the desktop, and the system still wanted to go to sleep mode.

I'll get you the contents of that file shortly. I assume this is a file that can be read in a text editor...
Last edited: Sep 23, 2018

You will possibly get more and better help from your friends at Kali Linux Forums https://forums.kali.org/showthread....ly-a-success-but-can-t-get-in&highlight=sleep

The two lines
cache: parent cpu1 should not be sleeping
and
ACPI : button: the lid device is not compliant to sw_lid
show bug reports.

Bigbiz on Kali Linux Forums mentions Beine. That was discontinued years ago. The present equivalent might be TinyPaw-Linux https://sourceforge.net/projects/tinypaw-linux/
"Selling water by a river."
OP
J

I came over here because it seemed like the kali linux forums were dead. I had to register a second account because I never got the activation email for the first and no response from admin.

I have bigger problems now anyway..my desktop doesn't even get past the POST screen now, and can't get into the bios.

I came over here because it seemed like the kali linux forums were dead.
Click to expand...

Unfortunately, that is a reason given by many users of Kali Linux.

Look here and see how many posts about Kali Linux are downvoted. https://unix.stackexchange.com/questions/tagged/kali-linux

I can't help feeling that if Kali users stuck with Kali Forums it might be a better place.
"Selling water by a river."
OP
J

Well the admin made a kali linux sub forum for a reason.

Josh380 said:
First of all, no attitude here, that's just the way I talk. My apologies if I offended you.
Click to expand...

No harm, no foul

I'll lay my cards on the table here - I have been using Linux exclusively for over 4 years now, burned my bridges with Windows 7 and my Windows is rusty.

But my understanding is that when Windows suspend feature is enabled and you power down, it does not truly power down, and Fast Start brings it back up fast to make The Dozer look good

Googling "windows 7 fast startup disable" provides some options, but if you can't even get past POST with the desktop even, I can understand your pain.

When you had the desktop running dual, had you learned enough of Kali to make the acquaintance of the GNOME Partition Editor aka GParted?

I am brainstorming here, but I am thinking that if you were to download another Linux - Ubuntu with the MATE DE (desktop environment) or Linux Mint 19 any flavour (Cinnamon, MATE, Xfce), you could use it on a Live medium (stick or DVD) to boot Kali off and replace with the Ubuntu or Mint.

I have to go in search of a Post I wrote elsewhere, but I was explaining to another would-be Kali user that Ubuntu and others have quite a number of the pen testing tools Kali uses in their own Repositories. So you could become acquainted with another Distro, get a lot of practice with the tools and command line, and then if you wanted you could try Kali again.

If you think there is merit in this approach, we could look further at it.

I got familiarized with it during install...

Every Distro's installer has its own partition editing function that can be used in an install if you take the wheel and use manual partitioning, but it is not GParted. GParted looks like as below (but with not as many Linux as I run, I multi-multi-boot) 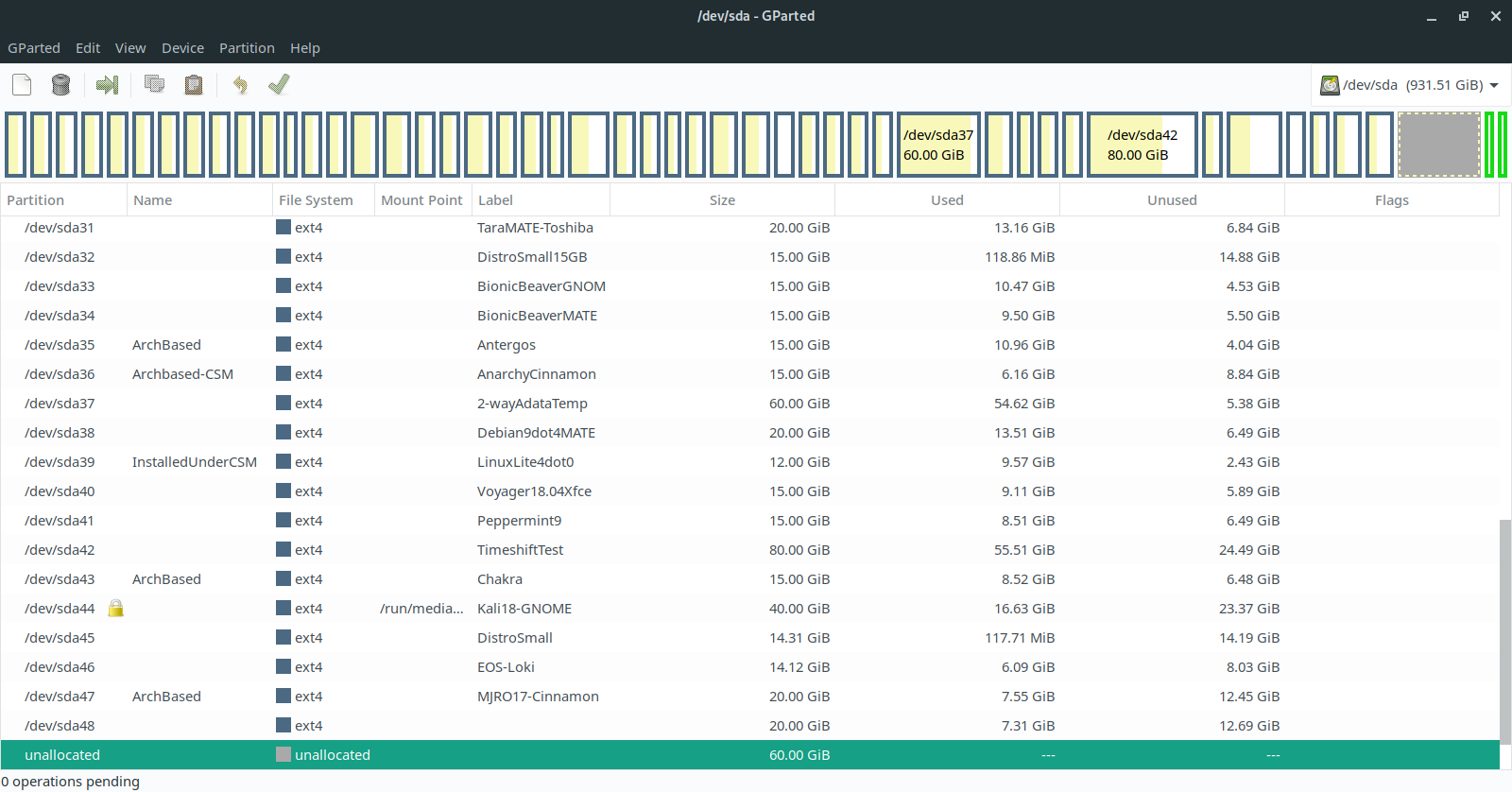 You can see a Kali down there but I seldom use it.

GParted is installed by default in Kali, so if you have not ever launched it, you may not have ever used it.

You can get GParted Live from here

and it will fit on a CD or small usb stick. It is cross-platform so you can use it with Windows.

I have to fly for a bit, but think about what I said.

Well, turns out the GRUB failed on my desktop, rendering it useless. I decided to start over and wipe everything clean. I know I could've ran windows repair to get the bootMgr back (had to do it once before), and back into windows, but it needed a re-install anyway.

I had a purpose for Kali, and it's purpose was served. Not quite to the end I wanted but I learned some stuff. Maybe someday if I'm feeling bored I'll try a different flavor of Linux.

Sorry it did not work out for you.

Good luck in your ventures, and you know where to find us

THOUGHTS FOR MARCH 2022 1. COVID SUX -There's no vaccine against stupidity 2. ON AV - nothing is bulletproof, but i wear kevlar - i use linux. 3. Still Beer o'clock where I live . 4. Come and have a sing-along at Rock Roxx . 5. Why so many Distros, Wiz?
You must log in or register to reply here.
Share:
Facebook Twitter Reddit Pinterest Tumblr WhatsApp Email Share Link
$100 Digital Ocean Credit
Get a free VM to test out Linux!