Installing LM on a SSD

atanere said:
No harm, no foul. I saw the humor right away! And since I'm up all night working the late shift, I can assure you I'm quite sober... for now.

I've just been enjoying your picture-flipping memtesting fun while deleting all the spammers who drift in during the wee hours.

Too difficult posting from my phone though, so I'm rooting for you (get the pun?) from the sidelines. Glad you got emojis working... now for Mint!
Click to expand...

I
I did get it, after your nudge... i would not have 2 weeks ago... lol.
I posted them on iOS. That may be the issue because they were taken upright and rotated, but show sideways... hmm

Downloading an old Mintie - 17.1 'Rebecca' KDE I need for your work. Should be finished in 30.

I should have said with nano that you use your direction keys to navigate, Home and End will take you to the start or finish of a line. Ctrl-x will exit you. When we change something there will be another step or two.

Sorry wizard I'm not very descriptive after I'm celebrating success! I was able to boot into Linux mint with the welcome screen and all. This was after going to a
"Linux mint Advanced boot options" then to "Linux mint kernel generic (as opposed to recovery, and upstart). I have to finish some business today but I'll get at that tonight. Hopefully with a pic, although it will most likely be sideways...

PcBuilderEd said:
I was able to boot into Linux mint with the welcome screen and all.
Click to expand...

I still love it when you talk like that!!!

Off to work... maybe catch you guys back on here late tonight.

Cheers
Well, I've been drinking again, and I know it's a sin.
But I just can't refuse an old friend. --Kansas

I love it when a plan comes together, I do a little dance, and Elaine says "What have you done now, Sheldon?" and tries to melt my brain. Works for me.

I'll put together some stuff that should help lock this into place. Cheers, I've saved and will spin and then comment. On Gecko (based on OpenSUSE) at the moment, welcoming a newcomer, and Gecko does not appear to ship with GIMP (our image editor), which I will remedy later.

Quick update. I wasn't able to boot this time.

I was able to get it to boot after after a few attempts though (using the method stated above).
Last edited: Sep 20, 2017

No that's fine, and totally not unexpected, albeit irksome for you.

Positives are that you can get in, and we are going to give you the tools to lock this in cement.

GIMP (Windows users think Photoshop) showed this on the way in, with Ed's pic. 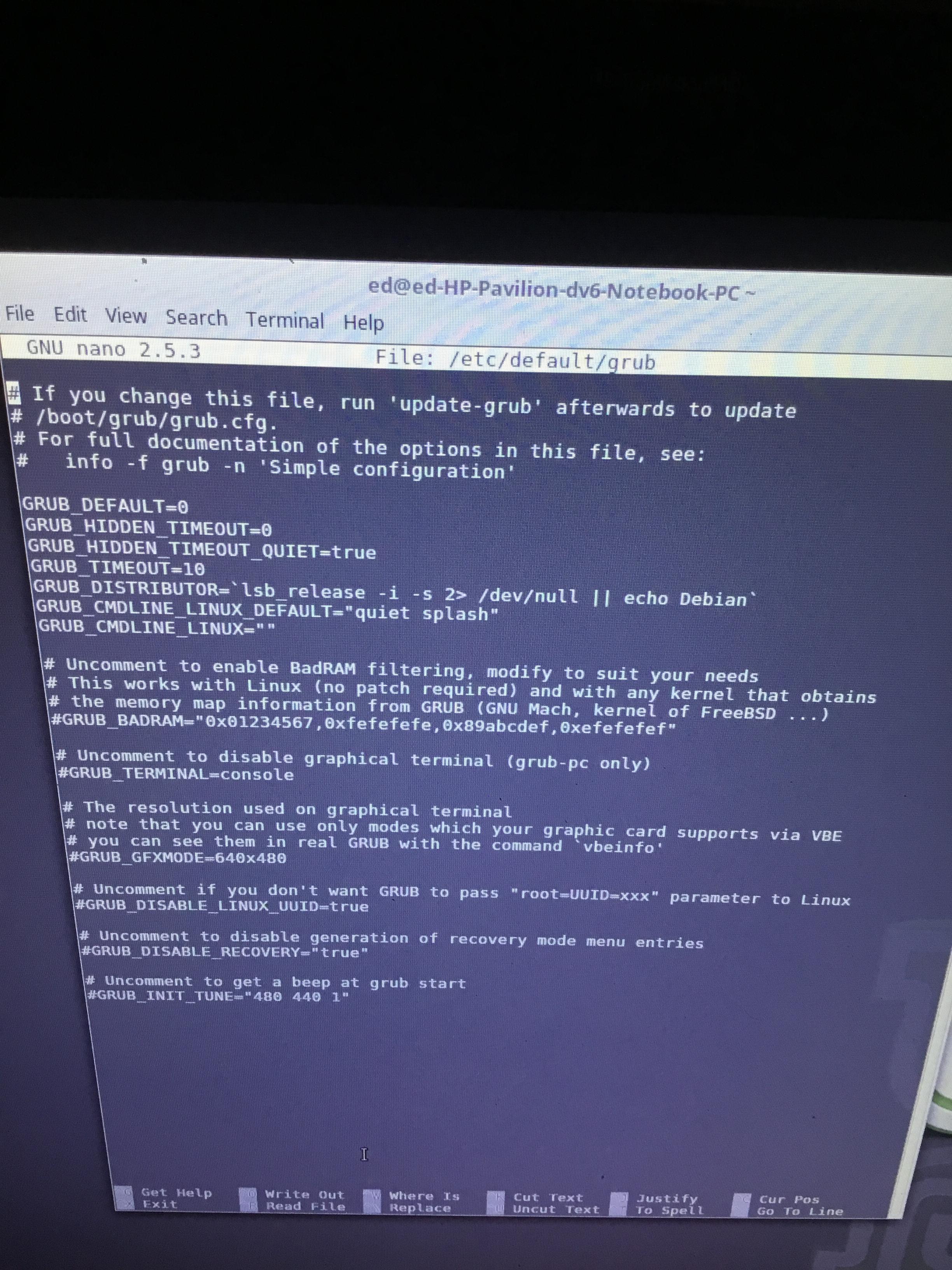 I am in a Mintie Sonya Cinnamon now, ie your environment, and mine looks as in the Spoiler


# If you change this file, run 'sudo update-grub' afterwards to update
# /boot/grub/grub.cfg.
# For full documentation of the options in this file, see:
# info -f grub -n 'Simple configuration'

GRUB_SAVEDEFAULT=true
Note the similarities and also some of the differences, which I have made more noticeable by bolding, italicising and colouring.

Linux does not read the stuff prefaced by #space. (The space is optional, just neat). They are human-readable comments, and we also talk about uncommenting, that is deleting the hash and the space.

The videoinfo cf vbeinfo reference we can look at elsewhere down the track if you need to adjust screen resolution to enhance a Grub Menu or screen splash logo &c.


Code:
I did not put the #, and you won't have it. Linux did it with the install, because os-prober detected that I had multiple Linux, and therefore (benevolent little sucker) determined that I needed a visible Grub Menu at every boot. You get this with dual-booting Windows as well, but if you run just one (1) linux, it makes the Grub invisible.

We can remedy this in the following way, unless you like pressing Shift each time you start up, to get to those Advanced/Recovery options?


At this point, we could exit, save, and be on our way, but you might want to read on first.

The above should tell Linux to boot your PC and show a Grub menu for 10 seconds, and if not told otherwise, boot into the highlighted entry. If not, we'll throw a # onto the front of the GRUB_HIDDEN_TIMEOUT_QUIET line.

The lines I have that say

mean that, as a Multi-booter, Grub menu will highlight to the last Linux I was in before reboot/restart, tick away 10 secs and then boot into that one. Handy if you were working in that Distro and want to get back there automatically.

Likewise if you have a favourite Distro, we can arrange that, but elsewhere for that.

Benefit in your circumstances is that, if you find that a submenu option in Grub, eg Advanced/Recovery or choosing an older kernel that works better (with hardware &c), my method use will take you straight to that after after 10 seconds kick in.

So try making yours as close to mine as possible, and reboot.


Code:
We type in a lowercase or uppercase y, and get

That has saved the file but it will not sustain changes with a reboot.

For that we need to type and enter


Code:
and once that is complete, only then do we reboot.

So try that when you have time and I will be back with more.

Wizard you've outdone even yourself on this post and I have to say thanks. I am impressed even more so than usual. I'll give this a go tomorrow!

Thank me when it works. Sleep well.

I am off to blow up some Distros and fix them.

There is an important bit or two of housekeeping that should be performed before we go anywhere further.

When you are in an operable session of your Mintie, go to Terminal (Ctrl-Alt-t in Debian-based Distros) and type in and enter


Code:
You will be prompted for your password (no movement for security purposes) type it and enter.

You will be rewarded with a message


Code:
This has enabled ufw – (the Uncomplicated Fire Wall) and generated a startup script that will operate following each reboot but is in place now.

Between ufw and any firewall your router has, you may not ever have a need of anything else, though we can steer you to antivirus software operating under Linux.

Some Distros, in particular those under different Families, may not have ufw but you can either install it (I have, on some, to expedite Folder Sharing) or use their own.

NEXT is about TRIM. This applies to users of SSDs – solid state drives.

If yours is a brand spanking new SSD & this is the first Linux you have put on it (as is the case with the OP), you want to look after it.

I haven’t got an SSD yet, but atanere and others may help more here.

I have read opensource’s https://opensource.com/article/17/1/solid-state-drives-linux-enabling-trim-ssds a couple of times, and that has helped me to understand it a little better. Google search keywords were simply “linux trim ssd”.

Trimming your SSD can also be accomplished manually on the command line or in a cron job
Click to expand...

… ask us about cron and anacron what are they? In an appropriately titled thread if you wish.

Suffice it to say that a “daemon” runs and monitors certain processes all the time you are in session. A cron job runs at times you the User schedule, and anacron jobs run at times linked to events, eg startup, shutdown, &c.

df output showing where bootloader is installed, or whether you remember during the install setting it to /dev/sda or /dev/sda1 or it did it for you

Hey everyone. A little update. Firstly apologies for being away I've been busy. So I attempted your solution wizard and I don't appear to have more success booting. I think I updated the grub successfully. However when booting I still get errors. They do appear to be slightly different errors. The errors themselves are the same ("loading outside hd0" "kernel panic" etc.) however the order they come in after the option I pick from boot menus appear to be different. Hmm...

That's OK mate, my wife Elaine tells me that people have a life outside of Linux and computers, but I just laugh as I know she is pulling my leg.

I'll try to get in but last I checked the command line wasn't able to get in either. This business about lives is simply an excuse (joking).
Seriously though enjoy your evening and do something with your wife, linux will be there tomorrow, even mine!

I am a huge fan of gpt over msdos, for partition structure, but this is not about my interests, but rather getting you up and running.

We can always look at other options after we get you up & running, and if me Auntie had balls she'd be me Uncle ... but the main issue is to get you a Linux you can rely on to boot.

Wow. I think this is the most difficult (modern) install I've ever encountered. There is much to be learned from all the work, but I keep asking myself if we have just missed something more simple or basic? It is usually just not this hard.

So, let me grasp at another straw briefly... please get into your BIOS/UEFI setup and look for "SATA controller mode." It should be in there somewhere. If it is not set to AHCI, please set it to that and save changes. Let us know.

If the "SATA controller mode" setting was IDE or RAID, changing it might or might not be an immediate fix, so a reinstall still might be necessary. I just read on a HP website that changing this setting might prevent it from booting, so a reinstall may even be required if you actually change this setting.
Well, I've been drinking again, and I know it's a sin.
But I just can't refuse an old friend. --Kansas
OP
P

Hey guys I completely agree with the final two points. It's encouraging to know it's not like this normally. My goal is to have a stable and reliable system. If it's this picky it might be a problem in the future. I'm guessing we are missing something clear. Let me think a bit but I'll also attempt atanares ideas. This also was occurring with the boot from the USB, so my guess is the computer hardware or setting, not the ssd or hdd but I'm a noob
OP
P

Hey fellas. So I tried to change the settings in the bios but they don't have the option. Apparently this is a bit of a problem with hp laptops but I couldn't quite figure it out. I think ahci is the default however you can't change it. I'm going to look into this a little more. I did get into mint and did a driver update. There was one driver that needed an update, something with the firmware, I'm wondering if this might have an effect. Unfortunately when I try to restart to save the change it encounters the same problem. So if this is the problem it's just a matter of multiple attempts!
You must log in or register to reply here.
Share:
Facebook Twitter Reddit Pinterest Tumblr WhatsApp Email Share Link
$200 Digital Ocean Credit
Get a free VM to test out Linux!