Hello Nice To Meet You Again.

Can You Tell Me How To Install Drivers To My Printer?

So it's better to install this drivers as a root?

And What Should I Do?
Any advises?
Please
THX

sorry can you explain this little more wider
thanks

This is Big PDF Book:

This must be a key. The sollution:

Fuck This! I give up! I cannot spend day after day trying to install fucking printer!
Fuck Linux! And that's my final word.

I want you to follow my instructions exactly, if you can and report back.

For the benefit of The Viewers, Kubutek is using Xubuntu 19.04 'Disco Dingo', if her Profile is correct.

1. Open your Synaptic Package Manager - it is likely under Start - System, in your Menu 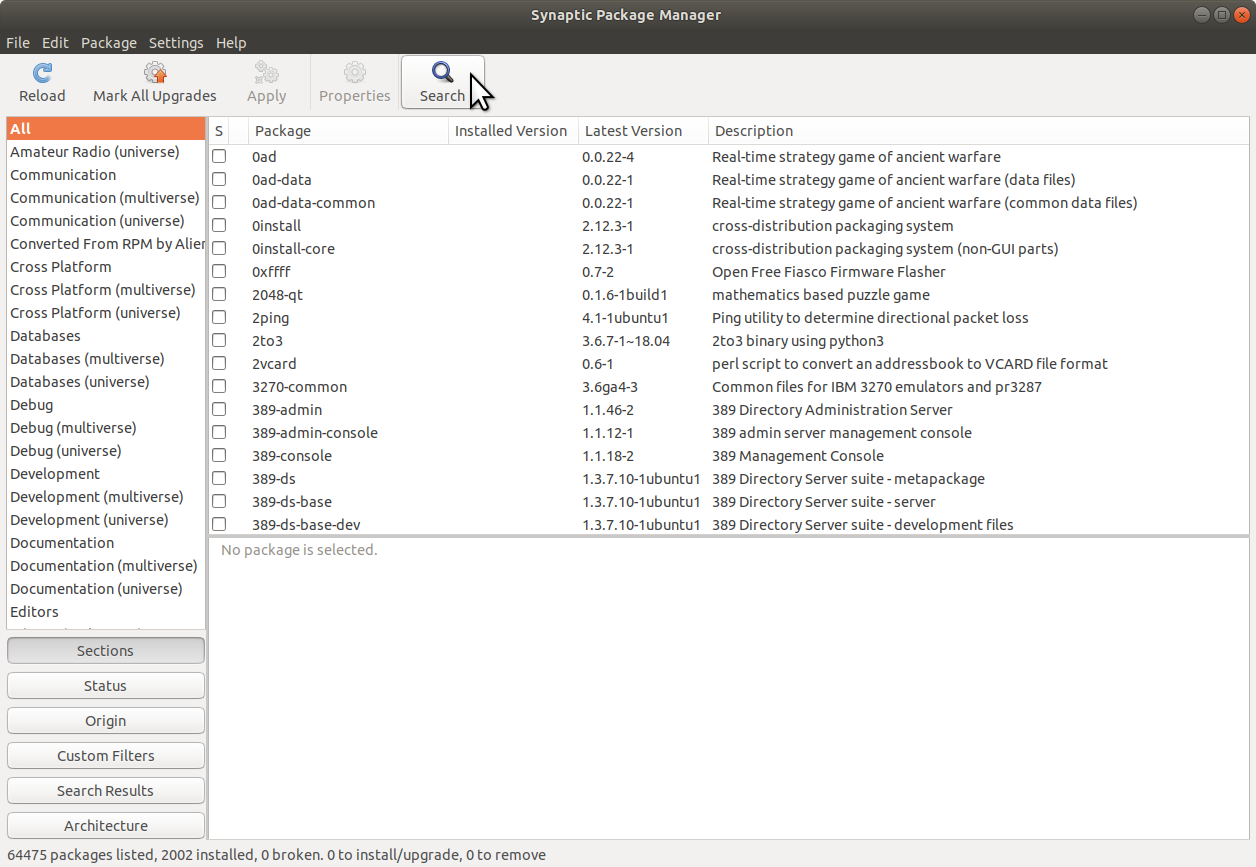 2. Click to search and type in hplip and press enter. 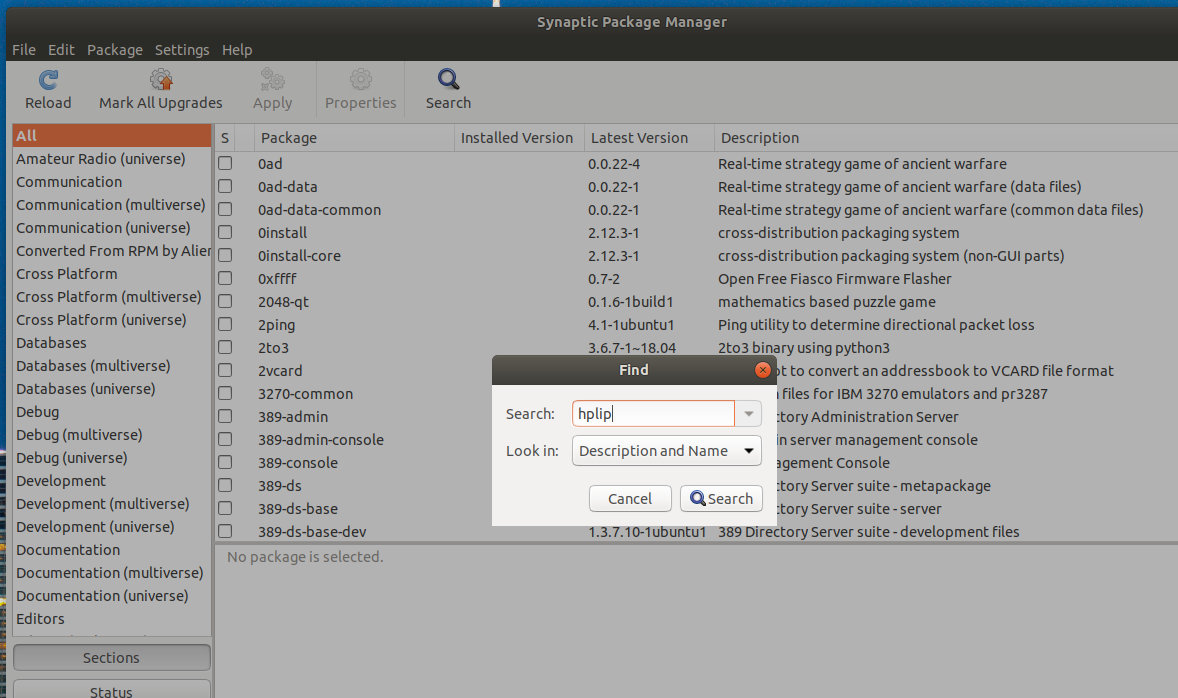 3. You will be presented with a window similar to the following 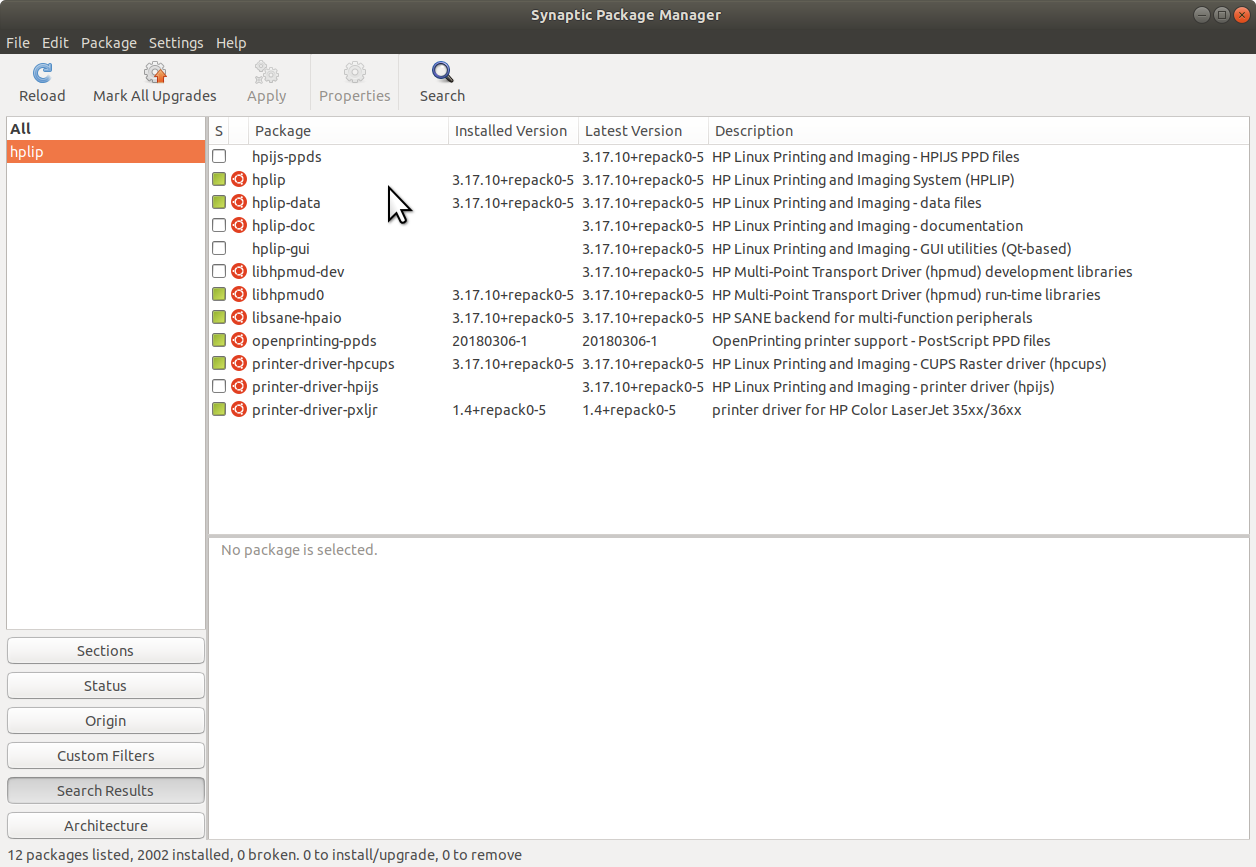 I am doing this from my Ubuntu 18.04 'Bionic Beaver' GNOME desktop, so the colour scheme and exact content may differ a little from yours.

We are looking for the line that says just

The (in my case) green fill in the little box at left means it is installed, and that should be so with yours too.

See Help - Icon Legend for what the colouring and icons mean.

4. Click the line saying hplip, and the lower pane, previously empty, will fill with details. 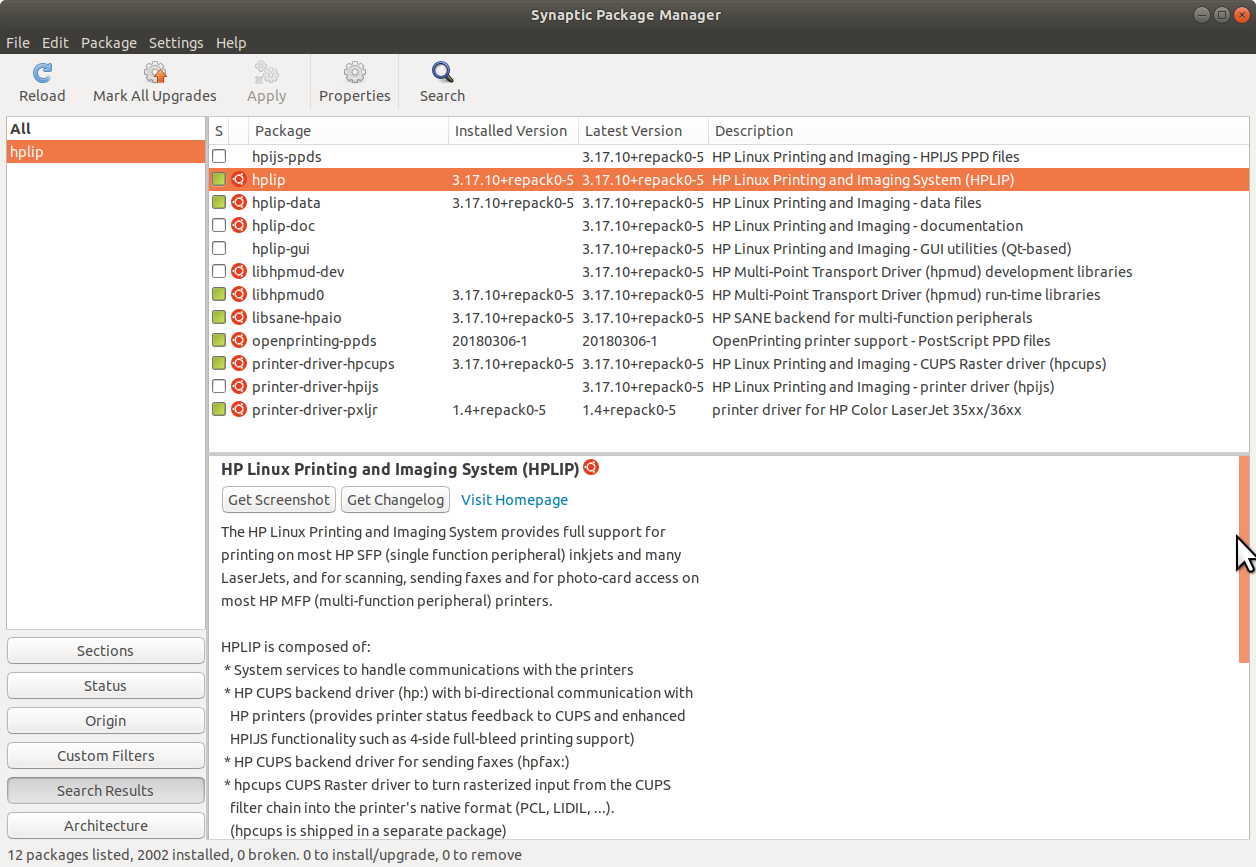 You can see where my mouse pointer is that you may have to scroll down to read all the details. Also there is a link to the Change Log for that package and a link to the home page for the package maintainers.

5. I want you to note down the version of hplip you have installed, and also whether the "Latest Version" beside it has the same details, or if not, the difference.

If you wish to continue with this path, please follow all the steps above and report back here for further instructions.

Bear in mind that I am on the East Coast of Australia and am 8 hours ahead of Cracow time, so I will be gone for dinner and the evening at 6:30PM my time, 10:30AM your time.

Look Man. I think you are just showing me another way to install hplip
Anyway hplip sucks for me. One time in some mysterious way I did
install German drivers GutenPrint, but how I did it, I can't tell you.

For me printing on Linux at home is case closed.
Linux sucks and everybody should know this!

using CUPS (Common UNIX Printing System - a printing device support system for systems based on UNIX architecture).
The first thing before starting the configuration is to check whether you belong to the "lp" and "lpadmin" groups by issuing the command:
groups user name
If not, add yourself (as an administrator) to these groups with commands:
adduser user name lp
adduser user name lpadmin

@alkion - thanks for the input, but at this point, it may only further confuse rather than help - the printer is a Canon, the Distro Linux Mint, and the CUPS page is directed at Maintenance of an already installed printer, rather than adding a new printer. Nice video, though


kubutek said:
Look Man. I think you are just showing me another way to install hplip...
Click to expand...

Probably not a good idea to try to second-guess the Wizard, my mind moves in Mysterious Ways.

With my Screenshot 3 and Screenshot 4 earlier, I showed the references to my hplip package, which was version 3.17.10 on Bionic Beaver.

Yours on Disco Dingo may or may not be newer, but you have not told me - does not matter.

A few lines lower than the hplip line, you will see

... not installed by default. It follows the same version sequence.

The GUI (graphical user interface) frontend would if installed, appear in your menu, and it may be more user-friendly to install the printer than some other methods.

I have a couple of shots here, and bear in mind that I do not have an HP Printer 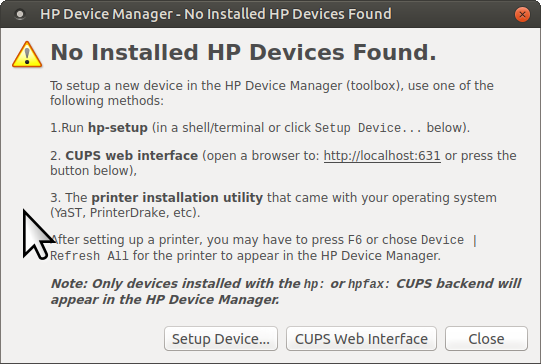 Don't mind the Device not found part - the rest is accurate, including

... which you may have visited already, but there is more on this below. 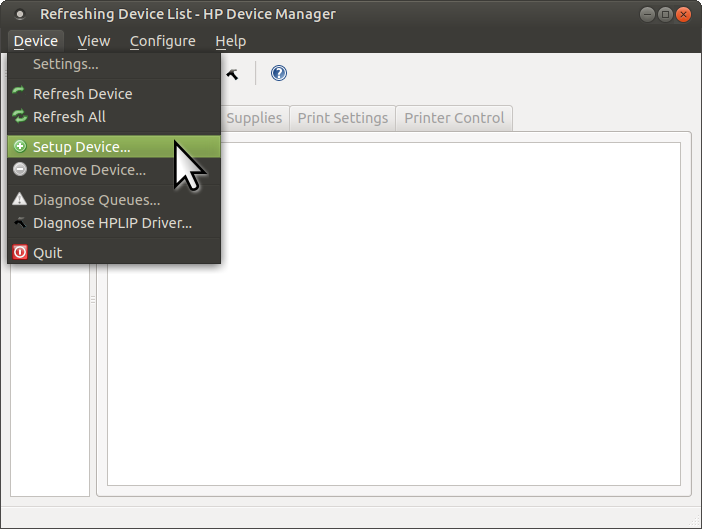 Personally, I think your best chance of success is with a different approach, as follows.

The two easiest ways in Linux to install a printer is if you have a PPD file or a .deb file (for Ubuntu, Linux MInt &c, if Fedora or other Redhat-based use .rpm file)

There is a .ppd file for the HP laserjet 1010 called

which you can get at 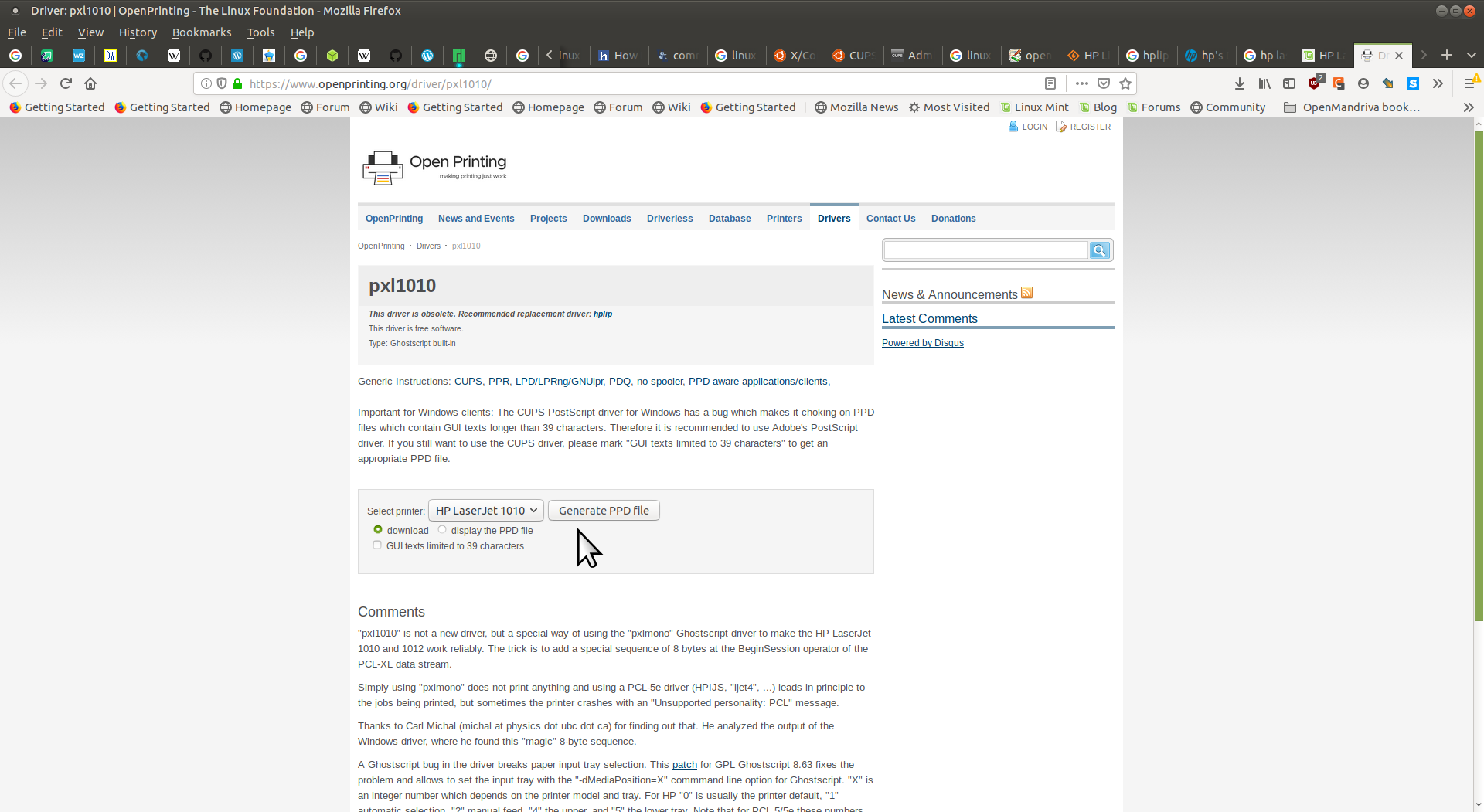 It may be obsolete, but then the Laserjet 1010 is nearly so, also, and my research indicates this may work.

Indeed, a couple of posts further down in that Thread, he referred you to the exact same site

You gave no indication as to whether you have tried this downloaded .ppd.

If you do download it, there are at least two ways to use it:

1. Through your Xubuntu's printer setup (Menu - start typing Printers it will appear)

2. as a more direct approach through the CUPS website, and provide the .ppd when prompted.

If you want to try either of these approaches, pull the printer out of the bin, and let us know if/when you need help.


kubutek said:
Linux sucks and everybody should know this!
Click to expand...

I leave you to remember 3 things:

1. You came to this site seeking help

2. You came to me asking for help

3. Bad language such as you have used above, and elsewhere, will not be tolerated, if you wish our help. Would you use that with your babcia and Dziadek? I think not, this is not Twitter nor Pinterest, nor Facebook.

For the rest of my friends and our Members

It's Friday in Oz so to all and sundry

Enjoy your Linux and

CUPS and not HPLIP. Problematic printer? https://askubuntu.com/questions/838566/hp-printer-error-unsupported-personality-pcl/1103047#1103047
“I can explain it to you, but I can’t understand it for you”

I am not going to make you sad Guys, but can you delete my existence from this forum?

Last word I am saying to you is: MindRiver.pl
& buy Windows (Better Support)

Sad....it would be extremely doubtful that a 10 year old could actually make us sad.

When you eventually become an adult you may recognise that there was a time in your life when you behaved like a spoilt brat. That time would be now.

I feel quite sure the Moderator/s will remove your details forthwith.
Last edited: Oct 25, 2019
Condobloke ...Outback Australian :: fed up with Windows antics...??....LINUX IS THE ANSWER....I USE LINUX MINT 18.3 EXCLUSIVELY.

“A man travels the world in search of what he needs and returns home to find it."

It has been said that time heals all wounds. I don't agree. The wounds remain. Time - the mind, protecting its sanity - covers them with some scar tissue and the pain lessens, but it is never gone. Rose Kennedy

Code:
They will try to remove the printer and add it via the command:

Can You Tell Me How To Install Drivers To My Printer?
Click to expand...

Wich distro do You use? Under Slackware it's very simple, bat need Internet connection. By my hplaserjet 1020 I do:

Closing this Thread to input in a moment, prior to deleting this and the OP's other Threads.

Thanks to all helpers for their efforts.

BTW - I'll leave it to @Rob to conclude the young lady's membership as he chooses. Thanks Rob.