I have a MacBook and am thinking of using Bootcamp and installing Ubuntu Linux software in the hope that it may be able to read a few external hard drives that I cannot currently read using Mac and Windows 10 software. I sent off four drives and my local computer store said they tried Linux and managed to read some of the data.

Just wondered if it was worth me trying Linux as well in the hope I can get somewhere with the other drives.

Does anyone know if Linux would have any good tools or be able to read some troublesome hard drives that are not being detected or need initialising ?


Smartmontools - Community Help Wiki
If it ain't broke don't fix it. If you can't fix it don't break it. You reap what you tweak.

Thanks. I will try that once I’ve installed Linux.

MikeyT201 said:
Thanks. I will try that once I’ve installed Linux.

You're welcome
If it ain't broke don't fix it. If you can't fix it don't break it. You reap what you tweak.

There are lots of test and recovery tools in Linux. A tool like testdisk along with fsck, fdisk, and Gparted will go a long way towards discovering and fixing drives. I had a couple of spinners in my parts drawer that I thought were bad. One really was, but the other came right back after using testdisk and then fdisk and gparted to get it back to life.
The next brick house on the left ...
HP-ENVY-x360, i7-1165G7, 12GB, 500GB, Kubuntu 20.04.2 LTS, 5.8.0-41-generic x86_64
DISCLAIMER: I do not dual boot with Windows, and never will. I use Windows at work, because life is hard but the paycheck is good.
OP
M

I have, in the past, had good luck with SpinRite. It is not free, nor is it Linux. It's actually DOS, or at least was the last time I had the chance to use it for anything. It operates outside your regular OS. I haven't had a reason to use it in at least a decade, but a quick search says it's still up at GRC. As it's not Linux, I am hesitant to mention it - that and the fact that it's not free.

www.grc.com
We actually have some rules.
Hey, how long have you been using Linux? Please see the poll (and vote) at this link.
Learn how to ask a good support question (UPDATED!)
I have decided to offer inexpensive Linux-based web hosting.
OP
M

Were you able to use one of the tools mentioned?
How did it go?
If it ain't broke don't fix it. If you can't fix it don't break it. You reap what you tweak.

HDD testing tools, this reminds me of what happens when you put your faith in such tools.

A few years back (windoze) I had several Western Digital HDDs and Seagate HDDs...I had both manufacturers HDD testing tools and I would run them from time to time...I always got the same result...HDD is ok.

Then one day without warning one HDD failed, so much for testing tools. These days I use SSDs and every month or so I create a System Image with Foxclone, which is stored on an External HDD just in case.

I did read somewhere it's not a good idea to continuously test SSDs because it can effect the Drive., so I don't test mine at all. 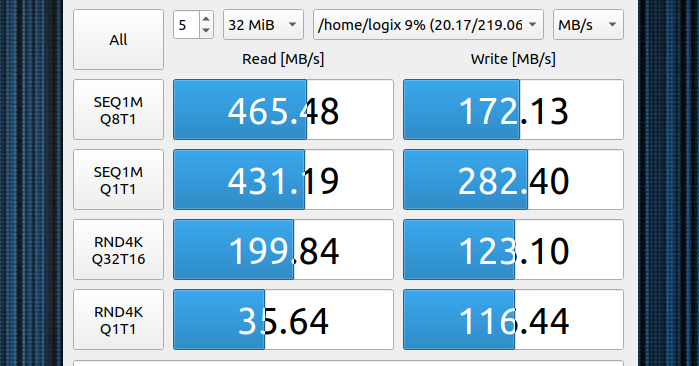 KDiskMark is a free and open source alternative to CrystalDiskMark (which is Windows only) for Linux, a GUI HDD / SSD benchmarking software.